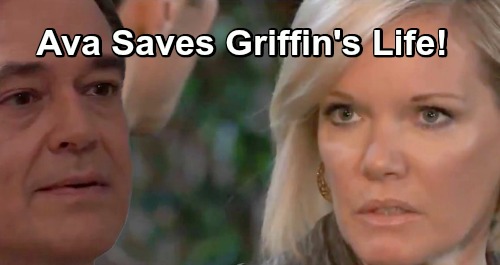 General Hospital (GH) spoilers tease that Ryan Chamberlain (Jon Lindstrom) will plan another murder. His last attempt didn’t go very well, but he won’t let that discourage him. Ryan is a dangerous man with deadly intentions, so he’ll just try to be more careful next time. He’ll feel confident that his sudden blindness was the only reason he got tripped up.

On February 8, Ryan will add one more victim to his murder list. It sounds like there’ll be someone who poses a threat. That’s usually why Ryan feels the need to snuff a Port Charles resident out. Kiki Jerome’s (Hayley Erin) murder was a twisted attempt to please Ava Jerome (Maura West), but all the other victims were pests who had to be eliminated. Ryan just couldn’t risk exposure.

However, there’s a chance the next victim will pose a risk in another way. General Hospital spoilers say Ava will offer sympathy to someone on February 8. That’s the same day Ryan will pick out his new victim, so there may be a connection. Perhaps the green-eyed monster will drive Ryan down this lethal path. This time he may think there’s a risk to his relationship instead of his identity.

Could it be Dr. Griffin Munro (Matt Cohen) that Ava warms up to? They seemed to be making a hint of progress in their last scene together. There was still plenty of tension, but at least Ava wasn’t waving a gun around and threatening to kill him. It’s all about baby steps. Perhaps things will really start to thaw in the coming weeks.

On February 11, General Hospital spoilers say Griffin will get an unexpected visit. Could it be Ryan who shows up? Will he try to make his deadly move? GH fans will also see Ava arrive somewhere just in time on February 11. She might inadvertently stumble across this meeting and spoil Ryan’s plot. He may not be able to pull out his knife and do the deed like he anticipated.

Regardless, General Hospital spoilers hint that Ava herself could land in danger by the end of this storyline. If she figures out “Dr. Kevin Collins” is Ryan or just fears Kevin has come unhinged, Ryan may decide his obsession has to die! We’ll give you updates as other GH news comes in. Stay tuned to the ABC soap and don’t forget to check CDL often for the latest General Hospital spoilers, updates and news.