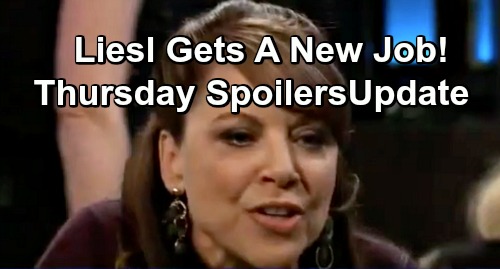 General Hospital (GH) spoilers for Thursday, January 31, tease that Shiloh Archer’s (Coby Ryan McLaughlin) seminar will take a combative turn. He’ll pit Kristina Corinthos-Davis (Lexi Ainsworth) and Alexis Davis (Nancy Lee Grahn) against each other, but he’ll believe it’s for a good cause. Shiloh will hope they can get to the heart of their conflict. He’ll claim he wants to help them resolve it right then and there.

Kristina will be inches away from Alexis’ face as she declares that she wants respect. Shiloh will think that’s an excellent admission. He’ll encourage Alexis to give Kristina what she wants and ask for what she wants in return. General Hospital spoilers say Alexis will appreciate the honest approach. She’ll even start using Shiloh’s tactics to reexamine her issues with Julian Jerome (William deVry).

Speaking of Julian, he’ll meet up with Ava Jerome (Maura West) in Thursday’s episode. Ava will remain riled over Kiki Jerome’s (Hayley Erin) murder, but Julian will warn against seeking vengeance. Getting herself thrown in prison wouldn’t help the situation. In fact, it would just leave Avery Corinthos (Ava and Grace Scarola) without another family member in her life.

Other General Hospital spoilers say Liesl Obrecht (Kathleen Gati) will make a surprising discovery. During a chat with Maxie West (Kirsten Storms), Liesl will notice that Maxie isn’t wearing her wedding ring. Maxie may confess that she’s trying to take steps toward moving on. She might remind Liesl that it’s what Nathan West (Ryan Paevey) would want for her.

Liesl may admit that’s true, but she won’t like Maxie’s next love interest pick. She won’t think Peter August (Wes Ramsey) can even begin to compete with the man Nathan was. At the same time, Liesl always makes the most of any opportunity. Since Maxie’s got Peter wrapped around her little finger, Liesl will think she can take advantage of that.

Meanwhile, Valentin Cassadine (James Patrick Stuart) will request a visit with Peter. He’ll deliver some instructions and hope that Peter will get on board with his plan. It looks like Valentin will push Peter to give Liesl a job. Since Maxie may push for that as well, Dr. O will ultimately get her wish. GH spoilers state that Liesl will become The Invader’s newest employee soon enough.

Over with Dr. Kim Nero (Tamara Braun) and Drew Cain (Billy Miller), they’ll let their friendship keep blooming. It’s rapidly becoming something more, so don’t be surprised when another kiss happens. Drew and Kim should lock lips again by the time next week rolls around.

Until then, Jordan Ashford (Briana Nicole Henry) and Harrison Chase (Josh Swickard) will really try to focus. The serial killer’s still on the loose, so they need to concentrate on the details of the case and get some answers. Jordan will eventually make a crucial call to someone who could assist them. She’ll believe this character could help them catch Kiki’s murderer, so it’ll be worth a shot.

General Hospital spoilers say Franco Baldwin (Roger Howarth) will pick up the phone on Thursday. Will Jordan be summoning him to the PCPD? Franco will believe he’s in trouble at first, but Jordan may just want to pick his brain and figure out the killer’s thought process.

Alas, Franco will find himself truly on the hot seat before long. Thanks to Ryan Chamberlain’s (Jon Lindstrom) mind tricks, Lulu Falconeri (Emme Rylan) will point the finger at Franco in the week ahead. We’ll give you updates as other GH news comes in. Stay tuned to the ABC soap and don’t forget to check CDL often for the latest General Hospital spoilers, updates and news.