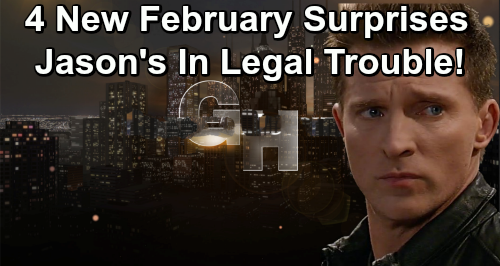 General Hospital (GH) spoilers tease that February sweeps will deliver some stunning moments. Several characters will get caught in risky situations this month, so GH fans should expect to be on the edge of their seats. Here are four more February sweeps surprises to look forward to.

1. Laura gets a clue about “Kevin”

Laura Collins (Genie Francis) has certainly been suspicious of “Dr. Kevin Collins” aka Ryan Chamberlain (Jon Lindstrom) since she came back to town. She doesn’t understand what’s gotten into him, but she may soon enough! Everyone’s been wondering who would be the first to figure out that “Kevin” is actually his twin brother, Ryan. Based on the latest GH info, it just might be Laura.

General Hospital spoilers say a clue will point Laura in a startling direction. She’ll grow increasingly curious about “Kevin’s” behavior, so she’ll keep digging until she gets the answers she’s looking for. Laura will follow a dangerous trail, which could lead her to the real Kevin at Ferncliff and put her in Ryan’s deadly path.

It’s been a while since GH fans have seen Margaux Dawson (Elizabeth Hendrickson), so General Hospital viewers are wondering what she’s up to. It seems the DA’s been busy offscreen, but she’ll pop back up soon enough. Margaux is linked to a shocking Port Charles resident, which will be revealed at some point this month. When Margaux spots a familiar face from her past, she should be taken aback.

We know Margaux referred to her ex-husband as “Dave,” so there’s a chance Shiloh aka David Henry Archer (Coby Ryan McLaughlin) will be the same man. If that’s true, it could pull her into the Dawn of Day storyline and make a mess of things. Sam McCall’s (Kelly Monaco) plan might end up in jeopardy.

Since Drew Cain (Billy Miller) will drift into this hot plot soon, perhaps General Hospital will pursue a Margaux and Drew romance again. The timing would be perfect since Dr. Kim Nero (Tamara Braun) just got back together with Julian Jerome (William deVry). Whatever the case, some major Margaux drama is brewing.

Sonny Corinthos would do just about anything for his children, including put himself in harm’s way. As he works to find Dante Falconeri (Dominic Zamprogna), Sonny may cross the wrong people. Ryan could remain a threat as well, so General Hospital fans will have to keep an eye on Sonny.

4. Jason in trouble with the law

GH viewers will also see a legal dilemma for Jason Morgan (Steve Burton). General Hospital spoilers say Jason will get on a cop’s bad side, so it could put him in lockup if he’s not careful! Jason will probably just be working to help Sam, but his approach may be something the PCPD frowns upon.

It sounds like General Hospital watchers will get some serious excitement for February sweeps. We’ll give you updates as other GH news comes in. Stay tuned to the ABC soap and don’t forget to check CDL often for the latest General Hospital spoilers, updates and news.