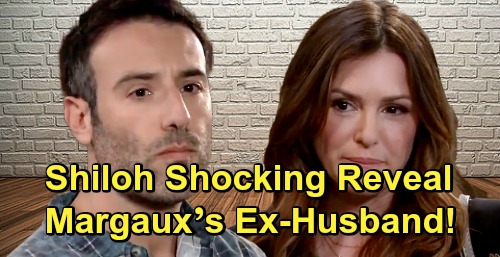 General Hospital (GH) spoilers tease that a long-forgotten clue could become part of the cult drama. GH plans out their stories pretty far in advance, so they often throw in little nuggets along the way. Remembering those nuggets and letting everything click into place is part of the fun.

Let’s consider what we know about mysterious Shiloh (Coby Ryan McLaughlin) – the man of many names. Shiloh originally introduced himself as an old buddy of Drew Cain’s (Billy Miller). He suggested Drew would know him as “Hank.”

When Jason Morgan (Steve Burton) and Sam McCall (Kelly Monaco) spoke to him later, Kristina Corinthos-Davis (Lexi Ainsworth) introduced him as Shiloh and that prompted an explanation. Shiloh talked about how it can be helpful to reinvent yourself with a new name. Perhaps Shiloh has actually done this several times.

After Sam and Jason did some digging, they realized Shiloh was born David Henry Archer. His father was one of Sam’s first marks, so he refused to attend his dad’s wedding to the gold digger. He went by Hank at the time as an act of rebellion. Sam made a point to mention Hank’s anger over his inheritance being snatched out from under him.

Now let’s talk about some recent 2019 preview info. General Hospital spoilers say Margaux Dawson (Elizabeth Hendrickson) has a shocking connection on canvas that hasn’t been revealed yet. Since Shiloh is linked to so many people already, GH might as well throw in one more. In fact, it looks like Shiloh and Margaux were quite close once upon a time.

That brings us to the clue we mentioned. We have to go all the way back to August 2018 for this juicy hint, but it’s right there waiting for us. On August 24, Drew quizzed Margaux about her past. He wondered what her love life looked like before she came to Port Charles.

Margaux admitted she married the wrong guy right out of college. Drew asked how bad it was on a scale of one to terrible and here was Margaux’s response: “Dave – he was sweet. He was easy-going, but he had a tragic lack of imagination, which unfortunately, I just learned after we got married.”

For starters, did you catch the name of Margaux’s ex-husband? DAVE. Most likely as in DAVID Henry Archer aka Hank aka Shiloh! Margaux’s description just might fit, too. Shiloh is easy-going and as for the lack of imagination part, perhaps this whole Dawn of Day thing came about because he used to be so unimaginative. Perhaps Dave became Shiloh and tried to rise above his old mentality.

Margaux had some other important comments about Dave that day. She said, “He came from a good family and he inherited money, and that’s just all he wanted in life – just to maintain the status quo.” That sounds like our once inheritance-obsessed Hank. Despite Sam’s scam, maybe Hank still managed to walk away with some family money. He certainly had enough to get DOD up and running.

Do you think Shiloh is Margaux’s ex-husband and how will she fit into this mess? Will she land in danger because of their history together? General Hospital spoilers say some great drama’s brewing, so don’t miss the twists ahead. We’ll give you updates as other GH news comes in. Stay tuned to the ABC soap and don’t forget to check CDL often for the latest General Hospital spoilers, updates and news.