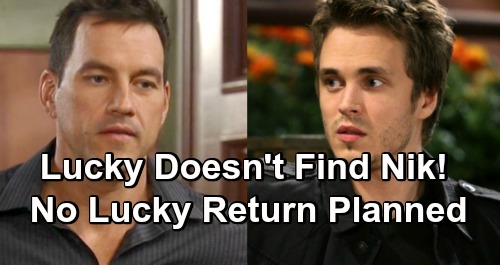 General Hospital (GH) spoilers has some more debunking to do about a supposed leak from the GH set. Everyone seems to be wondering whether Dante Falconeri (Dominick Zamprogna) will be returning in the wake of his wife Lulu Falconeri’s (Emme Rylan) violent attack. Lulu was nearly fatally stabbed by Ryan Chamberlain (Jon Lindstrom).

Lulu clearly needs Dante to return, but he’s away working undercover for the WSB. Laura Webber (Genie Francis) desperately wants Dante to come home and be by Lulu’s side, so a search for Dante will get underway quickly. However, it seems that Dante will be in some deep trouble of his own. Credible GH sources indicate that Dante is being held prisoner, and that he will be tough to track down.

As CDL previously reported, some websites have been falsely reporting that Laura Spencer (Genie Francis) will send Lucky Spencer (Jonathan Jackson) to find Dante. As CDL explained in a previous post, there’s simply no credible evidence that Lucky is returning to GH, nor that Laura will summon him to help search for Dante.

But now those websites have taken their “theory” a step further and are reporting that Lucky will go on a mission to find Dante, but that he’ll find his brother Nikolas Cassadine (last portrayed by Nick Stabile) instead. According to those sites, there may be a Nikolas recast in the works, or perhaps Tyler Christopher will reprise the role now that he’s done at Days of Our Lives.

It’s important to note that all of this is based on a supposed leak that is completely unsubstantiated. There are just no credible spoilers indicating that either Lucky or Nikolas is returning to GH, let alone that Lucky will go on a mission to find anyone.

Plus, it doesn’t really make sense that Laura would call upon Lucky for a mission like this, when she has so many other resources so readily available to her. It seems that it would be a matter for the WSB rather than a rouge agent. We can’t also forget that Lucky has been absent from Port Charles and his family for years, and it would seem uncharacteristic for him to return now when others are looking for Dante.

So, until we encounter credible sources saying that either Lucky or Nikolas is returning, there’s just one conclusion to reach at this point: Neither character is slated for a return, and there’s no basis to say that Lucky will go looking for Dante and stumble upon Nikolas. Stay tuned to the ABC soap and don’t forget to check CDL often for the latest General Hospital spoilers, updates, and news.