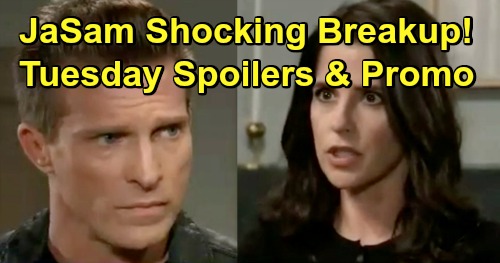 General Hospital (GH) spoilers for Tuesday, January 29, tease that Sonny Corinthos (Maurice Benard) and Carly Corinthos (Laura Wright) will meet with Dr. Griffin Munro (Matt Cohen). They’ll want to discuss Mike Corbin (Max Gail) and the next steps they need to take. Griffin will agree that Mike’s mental state has gone too far downhill to remain in the home. He may be surprised Sonny hasn’t moved Mike to Turning Woods already.

However, Carly will argue that Sonny isn’t Mike’s enemy. He just wanted to keep his dad around for as long as possible. Unfortunately, GH fans know that’s no longer beneficial to Mike. After receiving some guidance from Griffin, Sonny will try to figure out how he’s going to break the news to his father.

Other General Hospital spoilers say Stella Henry (Vernee Watson) will lash out at Curtis Ashford (Donnell Turner). He’ll bring up her past with Marcus Godfrey (Nigel Gibbs) and perhaps ask if she still has feelings for him. Of course, Stella won’t be interested in discussing this with Curtis. She’ll snap that he should refrain from making assumptions about her life, so Curtis will have to give her time to cool off.

Meanwhile, Shiloh Archer (Coby Ryan McLaughlin) will hope to make progress with Kristina Corinthos-Davis (Lexi Ainsworth). Daisy (Kelsey Wang) took the blame for sending the obituary and creepy emails, so Kristina’s feeling awfully betrayed right now. Since Shiloh doesn’t want Kristina’s view of his organization to change, he’ll let her know how important it is to win her trust back.

Kristina will undoubtedly assure Shiloh that he has it. She’s in too deep, so there’s no way she’ll turn against DOD over one incident. Over with Jason Morgan (Steve Burton), he’ll battle some confusion. Sam McCall (Kelly Monaco) just dropped the breakup bomb, so Jason won’t understand why she had such a sudden change of heart.

Thankfully, Sam isn’t talking about a real breakup. She’ll just want to keep their reunion a secret so she can get closer to Shiloh and expose him for who he really is. Sam can’t stop until she makes Kristina see that he’s manipulating her as part of his agenda. She’ll also want to know the details of that agenda, so cozying up to Shiloh seems like the best strategy.

Other General Hospital spoilers say Ava Jerome’s (Maura West) anger will bubble up again. She’ll fume over Kiki Jerome’s (Hayley Erin) death and insist that the killer’s going to get what he’s got coming. Ava will be pleased about Lulu Falconeri’s (Emme Rylan) recovery – mostly because it means there’s a chance at identifying the murderer and bringing him down.

Sadly, Lulu’s experiencing some memory loss. She’ll become distraught as she struggles in Tuesday’s exciting episode. Laura Webber (Genie Francis) will reiterate that it’s OK. She’s just glad Lulu survived that horrible attack, but Lulu will be more concerned about preventing another one and getting justice for the other victims.

General Hospital spoilers say a crying Lulu will insist that she has to remember. She’ll eventually settle down and get some rest, but those memories have to rush back sooner or later. When they do, Ryan Chamberlain (Jon Lindstrom) should be in big trouble! We’ll give you updates as other GH details emerge. Stay tuned to the ABC soap and don’t forget to check CDL often for the latest General Hospital spoilers, updates and news.