The Young and the Restless Spoilers: Nick Wants Sharon Back – Done With Phyllis, Desperate For Fresh Start

BY hellodrdavis on January 28, 2019 | Comments: 2 comments
Related : Soap Opera, Spoiler, Television, The Young and the Restless 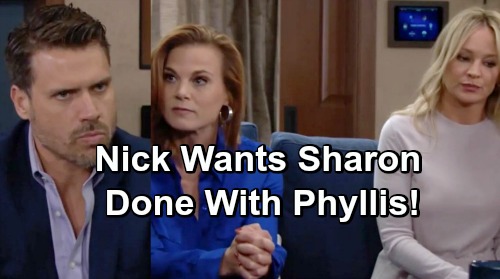 Right now, Nick’s stunned by the whole story and he’s in “fix it” mode. He desperately wants to protect his mother and the rest of the crew from eventual prosecution for the crimes they committed. Plus, he wants to keep Victor Newman (Eric Braeden) from going down for JT’s murder as well.

But one thing’s for sure. He’s as mad as hell at Phyllis for keeping the secret from him. He truly thought of Phyllis as his partner and confidante, and he never suspected that she would keep anything like this from him. It really bothers him that this lie has been between them from the inception of their relationship.

Could Nick and Phyllis be headed for splitsville? It certainly looks like Nick is headed down the path to dumping Phyllis. Sure, he’s irritated with the other coverup crew members as well, but Phyllis is the only one of the bunch who was perfectly willing to let Victor take the fall for their crimes. That plus the secret-keeping might be too much for Nick.

If Nick does call things off with Phyllis, then might we see him try to get back together with Sharon? Of course, he’ll be mad at Sharon for keeping the JT secret from him as well, but it’s different with Sharon. Unlike Phyllis, Sharon didn’t have it in for Victor, and she was the most reluctant one of the bunch to keep the secret from Nick.

Plus, Nick and Sharon will sort of be on even ground now. Nick cheated on Sharon and kept it a secret, and Sharon kept the JT secret from Nick when they were together. Nick might think that the two bad decisions cancel each other out, and that he might have a future again with Sharon.

Time will tell whether we see Nick pursuing Sharon again, but really who else is there for Sharon right now? Billy Abbott (Jason Thompson) is pursuing Victoria, so he’s out. Rey Rosales (Jordi Vilasuso) just renewed his vows with Mia Rosales (Noemi Gonzalez), so he’ll be busy for a while. Nick may be Sharon’s only option for the time being.

Do you think Nick will dump Phyllis and pursue Sharon again? Stay tuned to the CBS soap and don’t forget to check CDL often for the latest Young and the Restless spoilers, updates, and news.