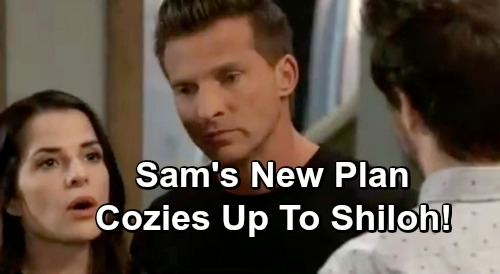 General Hospital (GH) spoilers tease that Jason Morgan (Steve Burton) and Sam McCall (Kelly Monaco) will have a risky, secretive romance. They’ll be like forbidden lovers who have to sneak around to avoid getting caught. Sam and Jason will officially reunite, but they’ll have to keep that hush-hush for the time being. The reason why just might surprise you!

For Sam, all roads lead back to Shiloh Archer (Coby Ryan McLaughlin) right now. He’s found more than one connection to exploit, so Sam wants to know more about his plans. Shiloh is clearly up to something, but what’s his endgame? He already found Sam in Port Charles. Shiloh could go ahead and get revenge, but he’s playing it cool and focusing on a longer strategy.

Sam’s obviously worried about the strange emails she received, but she’s more concerned about Kristina Corinthos-Davis’ (Lexi Ainsworth) involvement. She feels like Shiloh and his community could do real damage. Sam can’t rest until Shiloh’s out of her life and the lives of the people she loves. She won’t want anyone she cares about to get stuck in the fallout.

General Hospital spoilers say Jason will remain fearful as well. He thinks Shiloh is just as creepy, so he’ll be on board with Sam’s plan. She’ll want to get as close to Shiloh as possible. That may involve turning on the charm and even flirting a bit. Sam will cozy up to the man who’s targeting her, so Jason can’t really be in the picture.

That means Jason and Sam will have to keep their renewed relationship on the down low. Sam may be hoping to lull Shiloh into a false sense of security. She can make him believe he has the upper hand, but she’ll actually be positioning herself for an advantage of her own.

Could Shiloh start to fall for Sam? If so, what’ll happen if he finds out she’s playing him? Do you think Shiloh will be playing Sam, too? No one can be trusted in this scenario, so that’ll certainly make this an entertaining storyline.

General Hospital spoilers say Jason and Sam’s sneakiness will lead to more danger. All the catacombs mayhem may seem like a piece of cake compared to what comes next! GH fans can definitely expect some perilous moments for “JaSam” along the way.

It sounds like some great stuff’s coming up. We’ll give you updates as other GH news emerges. Stay tuned to the ABC soap and don’t forget to check CDL often for the latest General Hospital spoilers, updates and news.