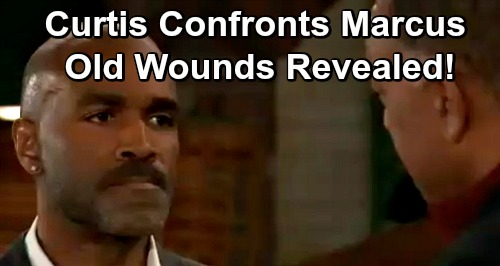 General Hospital (GH) spoilers tease that Curtis Ashford (Donnell Turner) is going to get a little too involved in his Aunt Stella Henry’s (Vernee Watson) life. He’s been very interested in Stella’s past with Marcus Godfrey (Nigel Gibbs) ever since Marcus arrived in Port Charles last fall. But Stella has remained tight-lipped about their past relationship, and she seems to want to keep a lid on the details.

But Curtis is a private investigator, and it’s not in his nature to let something like this go. All Curtis has ever wanted was to see his “Auntie” happy, but it seems like she has spent her life taking care of other people rather than tending to her own personal fulfillment.

Curtis knows that Stella and Marcus were a couple long ago, but he doesn’t know much more than that. And he’s probably wondering whether the two of them have the chance of any sort of future together. Of course, Stella has told Curtis that she and Marcus are all in the past, but it doesn’t look like Curtis is going to let it drop.

In fact, GH spoilers say that Curtis will soon approach Marcus, wanting to talk to him about his Aunt Stella on Thursday’s new GH episode, January 24. He may have some questions for Marcus, since Stella isn’t forthcoming with the details. It looks like Curtis will go fishing for details and he may even question Marcus about his present feelings for Stella.

This may not be such a great idea. Marcus tends to be on the gruff side, plus he’s going through a lot right now with his wife Yvonne Godfrey (Janet Hubert). Yvonne is a fellow patient of Mike Corbin’s (Max Gail) at Turning Woods Memory Care Facility, and she’s not doing so well. She rarely recognizes Marcus and would in fact prefer to be with Mike.

Marcus might not appreciate questions from Curtis about his feelings for Stella when he’s got a wife who needs his patience and care. It’s doubtful that Curtis will learn anything about Stella, or about Marcus’ past relationship with Stella, and Marcus will probably just end up telling Stella about what her nephew is up to.

That’s probably going to put Curtis in the doghouse with Stella, and it just might cause a rift between them. Stella won’t want to feel like Curtis is fishing in her background and she won’t appreciate it that he agitated Marcus or made him feel uncomfortable. Plus, there might just be something about her past with Marcus that she doesn’t want Curtis to know.

Might Curtis’ meddling open an old wound or two for Marcus and Stella? There’s obviously a reason that the two of them didn’t stay together way back when, and even though it doesn’t appear that either of them holds a grudge today, it could still sting to have those wounds reopened.

Do you think there’s something in Marcus and Stella’s past that they don’t want Curtis to know about? Stay tuned to the ABC soap and don’t forget to check CDL often for the latest General Hospital spoilers, updates, and news.