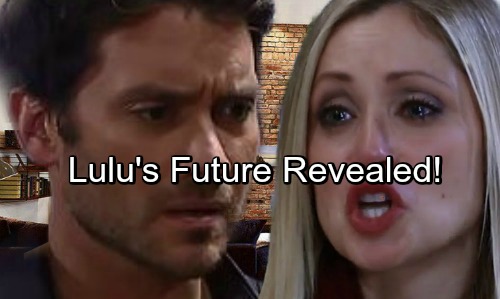 General Hospital (GH) spoilers tease that Dominic Zamprogna’s (Dante) departure will be a tough blow for many fans. However, it could also bring some new opportunities. GH might as well make lemons out of lemonade here. Perhaps it’s time for some couple shakeups and a little more drama.

Dante’s exit will likely be an open-ended one that allows for the character’s return. General Hospital buzz suggests a Dante recast could be coming eventually. Of course, that doesn’t mean Dante and Lulu (Emme Rylan) have to stick together. There are certainly some loyal “Lante” supporters out there, but there are other viewers who’d like to see some changes.

Relationship issues are the driving force of soaps, so Lulu and Dante’s problems could turn into more. They’ve been sparring over Lulu’s career lately, which could turn into a bigger deal than they anticipate. That’s especially true if Dante heads off on some assignment. Who knows how long he’ll be gone and what that distance might do to his marriage?

Some General Hospital watchers are actually rooting for a breakup. Rylan and Zamprogna were a fun pair to watch, but what about Rylan and a Dante recast? There’s no guarantee the chemistry will still be there. This might be the perfect chance to let Lulu play the field and pair her up with someone else.

Even if Lulu finds her way back to Dante later, it wouldn’t hurt to try something new. Rylan might even prefer it. She hasn’t weighed in on that topic yet, but she did respond to Zamprogna’s exit news. Rylan said, “@dom_zamprogna I am utterly heartbroken to see you go but also very excited to watch what is coming next for you. I believe in you! Go get em!”

Rylan loved Zamprogna’s version of Dante, but she might be interested in branching out now. A “Lante” split would open up some interesting story possibilities. Do you think Lulu deserves a fresh start? Would you like to see “Lante” continue or should GH try a new path for these characters?