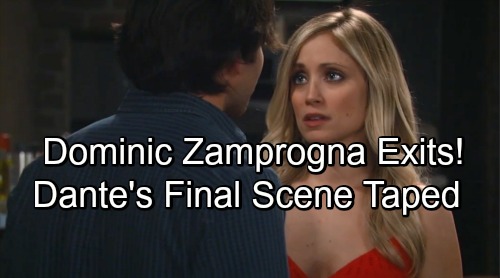 General Hospital (GH) spoilers reveal that a tough departure is coming up. GH viewers are losing another fan favorite, so we’d the better brace for the blow. There’s been plenty of buzz about Dominic Zamprogna leaving the role of Dante, but many General Hospital watchers hoped it wasn’t true. That was wishful thinking, but it’s understandable. So many fans love both the actor and the character!

Unfortunately, the writing has been on the wall for a while now. It was just a matter of time until the exciting news was confirmed. Zamprogna decided to provide confirmation himself. He wanted everyone to know the truth and be prepared for the loss.

“So you’ve been asking,” Zamprogna said. “I feel I owe it to you awesome fans to tell you that I’ve taped my final scenes. Going to miss you all and my GH fam. Good things happening tho. More to come.”

Although the exit was expected, that doesn’t make it any easier to say goodbye. On the bright side, it sounds like Zamprogna’s got other projects in the works. We won’t be seeing his handsome face in Port Charles for much longer, but there should be opportunities to see him elsewhere. That’s undoubtedly why he’s choosing to leave GH. The time must be right to pursue other exciting roles.

Of course, this brings up questions of how Zamprogna’s departure will be handled. Will General Hospital kill Dante off? Could they send him out of town for a few months and let him return as a recast? This is definitely going to be a tricky situation, but GH has surely come up with a decent explanation.

It should be interesting to see how it all plays out, especially since Lulu’s (Emme Rylan) sticking around for now. Will she have to move forward without Dante or will her hubby just get a new face? General Hospital spoilers say some twists and turns are ahead, so stay tuned.

How do you feel about Dominic Zamprogna’s departure? Will you miss him as Dante? We’ll give you updates as other GH details emerge. Stick with the ABC soap and don’t forget to check CDL often for the latest General Hospital spoilers, updates and news.