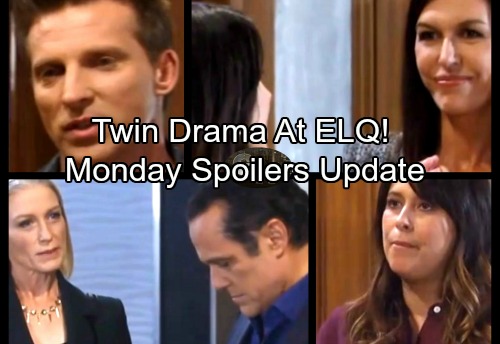 General Hospital (GH) spoilers updates for Monday, November 20, tease that Cassandra (Jessica Tuck) will track Sonny (Maurice Benard) down for chat. He’ll look perplexed by who she is and why she’d want to speak with him. Cassandra will probably suggest that Sonny has quite a reputation. She might hope to talk Sonny into doing business with her – illegal business, of course.

Sonny will probably be suspicious of this shady chick. Cassandra thinks she’s so smooth, but she oozes untrustworthiness. Sonny would be wise to run in he opposite direction, so we’ll see how he handles this encounter. Even if Cassandra wants something besides another partner, there’s sure to be some sort of trouble.

At the boxing gym, Finn (Michael Easton) will catch up with Chet (Chris Van Etten). He’ll see that Chet’s still going through a rough time, so he’ll try to help. Finn won’t want Chet to give up. He’ll promise that Chet still has an opportunity to turn his life around.

Elsewhere, Nathan (Ryan Paevey) will deal with the crisis Nelle (Chloe Lanier) created. The Invader just published a story that exposed Nathan as a fraud. He’ll scramble to get a grip on the chaos in Monday’s GH episode.

Other General Hospital spoilers state that Patient Six will bid someone farewell. He’ll stop by to see a friend and note that he wanted to say goodbye. If Patient Six is ready to take off on a search for the truth, that would explain the situation.

Regardless, it’s doubtful Carly (Laura Wright) will let Jason leave town without stopping by the house for a while. Thanksgiving is coming up and classic Jason is in Port Charles for the first time in five years. Carly will surely want her bestie at the family gathering.

At the Quartermaine mansion, Ned (Wally Kurth) will mention the twin drama to Michael (Chad Duell). He’ll think they need to address the Jason dilemma and how it relates to ELQ. Michael will chime in with his thoughts and they’ll debate the company’s future. No matter the topic, Ned always finds a way to disagree with Michael.

General Hospital spoilers say Robin (Kimberly McCullough) will also visit Mac (John J. York) and Felicia (Kristina Wagner). After they’ve talked for a moment, Anna (Finola Hughes) will appear. Robin will be quite interested in Anna’s new beau. She’ll urge her mom to spill this scoop on Finn, so Anna will once again find herself on the hot seat.

It sounds like a fun episode’s coming up. We’ll give you updates as other GH news emerges. Stay tuned to the ABC soap and don’t forget to check CDL often for the latest General Hospital spoilers, updates and news.