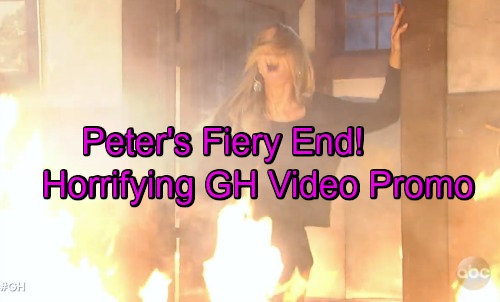 Peter is first shown in the cabin in the woods where Liesl had originally held him captive, tied to the bed. Franco Baldwin (Roger Howarth) is then shown on the docks in front of the Harbor Master office, where Nina had bribed the conservation officer to post quarantine notices concerning mosquitos that carried West Nile Virus.

Then Liesl suddenly appears and knocks Franco out from behind! Then the scene shifts to the stables at Wyndemere, the Cassadine mansion on Spoon Island, where Liesl threatens that Peter’s come to the end of the road.

Crazed Dr. Obrecht throws a firebomb she has fashioned from a bottle into the room where Peter is tied up, as Nina tries to stop her and cries “NO”! as the room explodes in flames and smoke, and horrible screams are heard!

The GH promo says that the urge for revenge Liesl started with against Peter really made him the scapegoat in place of his father, Cesar Faison (Anders Hove). Vengeance for Cesar’s murder of their son Nathan West (Ryan Paevey) could end in another murder.

If Franco found out the quarantine was a hoax, it could lead to Peter’s location and Liesl has already been identified as the prime suspect in Peter’s kidnapping by little Wyatt Hoover (Patrick J. Gibbons) the young boy scout who discovered Peter being held in the cabin.

This gives Liesl motive to shut Franco up as well, so there could possibly be two murders here if Liesl hit Franco hard enough. Meanwhile Peter is in dire straits and is about to suffer a fiery death if someone does not get to him in time to rescue him – making Nina an accomplice to murder as well as kidnapping.