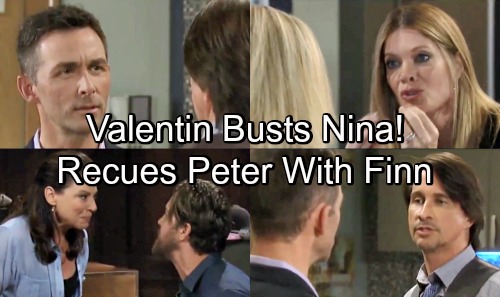 General Hospital (GH) spoilers tease that Valentin Cassadine (James Patrick Stuart) will soon solve a mystery. Could that mystery involve the whereabouts of Peter August aka Heinrik Faison (Wes Ramsey)? Valentin knows that Nina Cassadine’s up to something, so he’ll do whatever it takes to uncover the details.

Several GH characters have been inching closer to the truth. Sam McCall (Kelly Monaco) and Curtis Ashford (Donnell Turner) deduced that Peter was rolled out of his room in a laundry cart. They eventually determined that Liesl Obrecht (Kathleen Gati) disguised herself as a laundry service employee and wheeled Peter away. Unfortunately, they don’t know where Peter’s being held just yet.

Wyatt Hoover (Patrick J. Gibbons), the PC Pioneer and art therapy patient, did his best to help Peter out. He pointed Franco Baldwin (Roger Howarth) and Hamilton Finn (Michael Easton) in the direction of the cabin, but Nina’s quick thinking saved the scheme. She hid Peter in a root cellar and later, helped Liesl move him to the stables at Wyndemere.

That move bought some time, but Nina and Liesl can’t avoid detection forever. General Hospital spoilers say Valentin will continue to battle suspicions. Nina came up with the idea of a bogus quarantine to keep Valentin away, but that was only a temporary fix. It won’t be long until Valentin investigates for himself.

After leaving the docks, Valentin placed a crucial call to GH. He wanted to make an appointment with Dr. Finn to ask questions about infectious diseases. It’s clear that Valentin has doubts about this supposed West Nile virus outbreak. There was nothing on the news about Spoon Island being quarantined, so Valentin must know something’s up.

General Hospital spoilers reveal that Valentin will consult Finn, but the doc will undoubtedly suggest there’s no danger. If there was really a quarantine, Finn most likely would’ve been consulted. He at least would’ve heard about it! Once Finn insists that Valentin’s been misinformed, he may wonder where all this is coming from. This could put them both on the path to Peter.

GH fans know Finn wants to find Peter for Anna Devane’s (Finola Hughes) sake. He may tell Valentin about the restraints he saw in Obrecht’s cabin and assume the hostage has been moved to Wyndemere. Perhaps Finn will tag along with Valentin for Peter’s rescue! He’ll certainly want to give Peter the proper medical care.

General Hospital viewers won’t want to miss the shocking moments ahead. We’ll give you updates as other GH info comes in. Stick with the ABC soap and don’t forget to check CDL often for the latest General Hospital spoilers, updates and news.