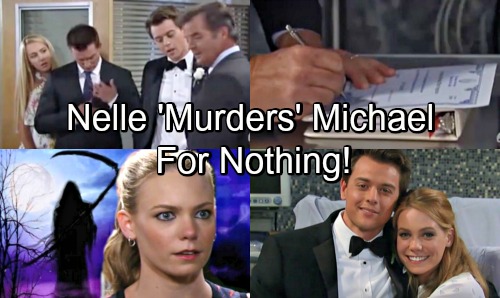 Jason has also been pitching in. Thanks to Sam (Kelly Monaco) and Spinelli (Bradford Anderson), Jason confirmed that Carly (Laura Wright) was duped by disappearing ink. He can’t prove Nelle did it, but that doesn’t mean that clue wasn’t helpful. It looks like Jason intends to give Nelle a taste of her own medicine!

At GH, Nelle insisted on marrying Michael before the evening wrapped up. She refused to let Carly win, so Michael went along with the idea. Little does Nelle know she’s being deceived! At this point, it seems even Ned may be in on the plot.

That makes sense considering all the prenup talk recently. Ned knew Nelle was upset about signing it, but he made matters worse by noting that he didn’t pressure Olivia (Lisa LoCicero). Since Michael previously indicated it was standard for Quartermaine marriages, it added to Nelle’s rage. There’s a good chance Ned did that intentionally. It fit perfectly with Chase and Michael’s scheme.

Ned’s latest move seems highly suspicious as well. He insisted Michael and Nelle’s union wasn’t legal until the marriage license was signed. Since Ned didn’t have a pen, Jason (Steve Burton) happily handed one over. Ned said he’d file the marriage license in the morning, so it’s easy to see where this is going.

It sounds like Jason’s pen contained disappearing ink! Ned’s giving that ink time to dry up and fade away for good. That way Nelle will believe everything’s all set. With Chase’s help, she’ll “murder” Michael and believe she’s going to rake in plenty of Quartermaine cash.

Next week, General Hospital spoilers say Nelle will be in full-blown panic mode. Will she give Chase the greenlight on a hit and later learn she’s not legally married to Michael? Nelle may fear she’s killed Michael for nothing. It won’t be long until Chase’s part in the plan’s exposed, so that’ll really put Nelle over the edge.