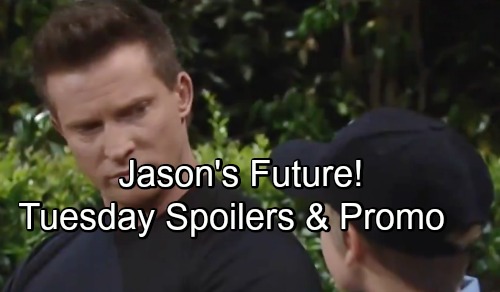 General Hospital (GH) spoilers for Tuesday, July 17, tease that Franco (Roger Howarth) will have some news to pass along. He’ll seem a bit uncomfortable at GH, but he’ll think he should be honest with Liz (Rebecca Herbst). Will Franco open up about the cabin drama and any lingering suspicions about Liesl Obrecht (Kathleen Gati)? Regardless, Liz will push Franco to trust his gut and do the right thing.

Elsewhere, Curtis (Donnell Turner) will give Drew (Billy Flynn) a pep talk. There’s no need for Eeyore to keep moping around! Curtis will think Drew should put himself back in the dating game. He’ll urge his pal to find a new woman and move on with his life.

While Drew considers that possibility, Finn (Michael Easton) will get annoyed with Valentin (James Patrick Stuart). Thanks to suspicions about the quarantine, Valentin will press for answers about West Nile virus and the likelihood of it being on Spoon Island.

Finn will probably suggest that if there was an outbreak, he’d know about it. He’ll wonder why Valentin’s wasting his time, but maybe they can both get some crucial clues from this conversation. Over with Nina (Michelle Stafford), she’ll have a major meltdown in front of Maxie (Kirsten Storms). As her voice cracks, Nina will ask if it’s wrong to want to control her out of control life.

Maxie will assume Nina’s keeping something from her, but she won’t get the full story just yet. It should take some work if Maxie hopes to crack the case. At the Wyndemere stables, Peter will offer a grim reminder to Dr. O. He’ll point out that she can kill him, but she can never escape the guilt.

Of course, Obrecht can be pretty ruthless when she wants to be! Guilt or no guilt, she’s capable of anything. Peter had better hope someone else learns the truth and takes pity on him. At the police station, Margaux (Elizabeth Hendrickson) will demand answers about Carly’s (Laura Wright) escape from Ferncliff. She’ll want to know exactly how this getaway happened. 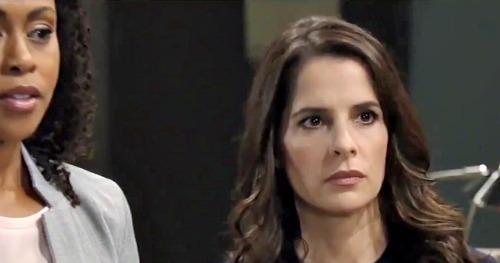 Margaux will turn to Jordan (Vinessa Antoine) and Sam (Kelly Monaco) for the real scoop. She’ll wonder if Sonny (Maurice Benard) and Jason (Steve Burton) were involved, but Sam and Jordan will shut down that idea. Carly acted on her own, so she’s the only one who should face consequences.

Other General Hospital spoilers say Jake (Hudson West) will have a chat with Jason. During some father-son bonding time, Jake will pose an interesting question. He’ll ask if Jason thinks Sam is worth going after. Jason has been giving Sam some space, but should he try another strategy? Should Jason show Sam that he’s ready to take that leap?