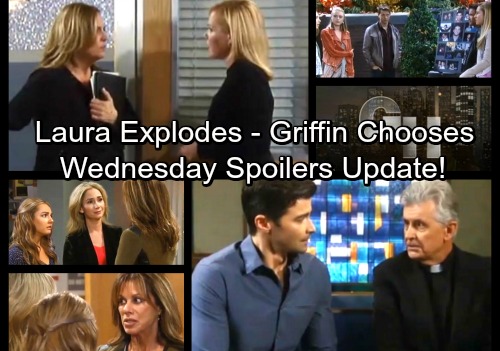 General Hospital (GH) spoilers for Wednesday, October 11, tease that Morgan’s (Bryan Craig) memorial gathering will begin. A few friends and family members will show up to support each other. Kristina (Lexi Ainsworth) thought this would be a good way to celebrate Morgan’s life and cope with the loss they’ll forever feel.

However, the ringleader of this get-together will be a no-show. Josslyn (Eden McCoy) will wonder why Kristina (Lexi Ainsworth) would blow off the event she organized. She just won’t think that sounds like something Kristina would do. Kiki (Haley Erin), Michael (Chad Duell) and Dante (Dominic Zamprogna) won’t have any answers either. They’ll all be a bit perplexed by Kristina’s move.

Of course, Parker (Ashley Jones) just invited Kristina back to her place. It’s clear that Kristina has found another strategy to tackle her grief. Unfortunately, Parker and Kristina’s reunion will hit a snag thanks to Alexis (Nancy Lee Grahn). General Hospital spoilers indicate that a fierce showdown is coming up.

When Alexis finds Parker and Kristina, she’ll have a lecture in mind for each one. Kristina will undoubtedly maintain that she’s an adult who can manage her own love life. It seems Alexis will dismiss Kristina’s stance and focus on Parker. Overprotective Alexis will certainly unleash her wrath!

GH spoilers say Laura (Genie Francis) will also be in fighting mode. Once she spots Ava (Maura West), she’ll want to voice her complaints about the withdrawn statement. Ava will try to walk away, but Laura will insist that the traitor’s going to hear her out. She’ll feel like Ava’s selfishness prevented any kind of justice for Nikolas (Tyler Christopher).

Ava may confess that she’s not proud of what she did, but Valentin (James Patrick Stuart) probably would’ve stooped even lower if she hadn’t made the deal. At least Ava got a partially fixed face instead of ending up at the bottom of a river somewhere. Kevin (Jon Lindstrom) will help Laura with her frustration sooner or later, but she’ll still be pretty steamed.

Other General Hospital spoilers say Griffin (Matt Cohen) will open up to a priest about his troubles. He’ll admit that he’s struggling with a big decision. Griffin’s deep feelings are pulling him away from the priesthood and he’s not sure how to handle that.

GH fans can expect Griffin to wrestle with this choice for quite some time, but he’ll ultimately come to grips with what he must do. Will Griffin decide to pursue a future with Ava? Things are looking good for this duo! We’ll give you updates as other news emerges. Stick with the ABC soap and don’t forget to check CDL often for the latest General Hospital spoilers, updates and news.