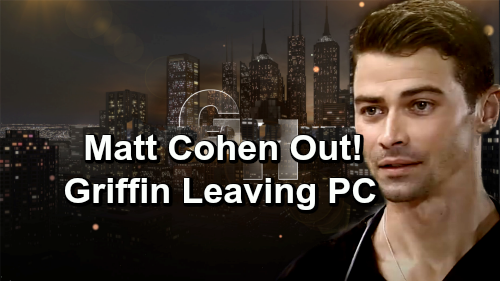 General Hospital (GH) spoilers tease that another major exit may be in the works according to a reliable source. According to a GH insider who’s been proven right in the past, Matt Cohen is out as Dr. Griffin Munro. This person is always careful about spilling accurate info, so there’s a good chance Cohen is indeed headed for the exit door.

Of course, this news isn’t too surprising since GH doesn’t seem to have a solid direction for Griffin anymore. They put him in a rushed romance with Kiki Jerome (Hayley Erin) after his breakup with Ava Jerome (Maura West), but that was only so Kiki would have a boyfriend to mourn her death. It also allowed Griffin to briefly be framed for Kiki’s murder, which added another layer of drama.

Now that all that’s wrapped up, we haven’t been seeing much more than a popup here and there. Griffin is bitter, broken and angry. That’s understandable since he’s struggling with Kiki’s death, but General Hospital is kind of dragging the aftermath of Kiki’s death. Perhaps there’s a reason for that, but it’s becoming repetitive for fans at the moment.

Griffin seems to be in a holding pattern, which could change now that Sasha Gilmore (Sofia Mattsson) is about to shake things up. She’ll be landing in Griffin’s orbit soon, but it may not be enough to truly give Griffin an interesting story that’s all his own. Griffin tends to piggyback on other characters’ stories instead, so maybe Cohen just decided to take advantage of other opportunities elsewhere.

A recast is an option, but it doesn’t seem likely. Any random doctor can do what Griffin does right now, so he’s not crucial to the canvas. In fact, it’s possible GH decided to fire Cohen. Since there’s no word on the reason for this probable exit (Cohen did hint at a ‘Supernatural’ return), General Hospital might’ve decided to write Griffin out and use that money for a different recast or return.

Whatever the case, it looks like GH may indeed be losing Cohen as Griffin. Again, this isn’t confirmed, but it definitely seems like a strong possibility based on the leaked information. Many viewers will miss Griffin if he’s out and others won’t, but it’s best to stay in the loop either way!

If Griffin exits GH, do you think he’ll leave town or be killed off? Could Ryan Chamberlain (Jon Lindstrom) be to blame? Will General Hospital go with another shocking fate instead? We’ll give you updates as other details emerge. Stick with the ABC soap and don’t forget to check CDL often for the latest General Hospital spoilers, updates and news.