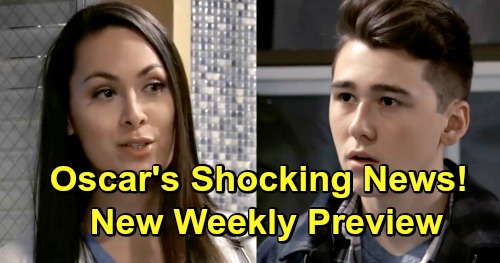 General Hospital’s new promo video teases that February is going to be epic in Port Charles. The video, titled “Big February” gives some major clues about some of GH’s biggest storylines, so let’s jump right in. First off, the prognosis is in as Dr. Terry Randolph (Cassandra James) has some late breaking news about Oscar Nero (Garren Stitt). Terry previously told Oscar that the clinical trial hadn’t worked to shrink his tumor, and Oscar resigned himself to live out his final days in peace.

But it seems that Terry will now have some more optimistic news for Oscar. She’ll tell Kim Nero (Tamara Braun), Drew Cain (Billy Miller), and Oscar that Oscar’s latest test results are in, and she’ll look and sound hopeful. Could Oscar’s tumor have shrunk, perhaps as a delayed reaction to the clinical trial treatment?

Next, the promo promises that a mystery will deepen, as it shows Sam McCall (Kelly Monaco) getting closer to Shiloh Archer (Coby Ryan McLaughlin). The two are talking at The Metro Court bar, and Shiloh says, “You still don’t trust me, do you?” to which Sam responds, “Why would I?” Of course, this is all part of Sam’s plan to ingratiate herself to Shiloh and infiltrate Dawn of Day (DOD).

Sam eventually wants to cozy up to Shiloh so that he’ll let his guard down and she can find out exactly what he’s up to with Kristina Corinthos-Davis (Lexi Ainsworth), who’s totally enmeshed into DOD right now. But Sam can’t be too eager to join DOD; she’s got to play her cards right and let Shiloh think that he’s slowly breaking down her walls. Will she be able to get to the bottom of the Shiloh mystery?

Finally, the Big February promo teases some movement on the Ryan Chamberlain (Jon Lindstrom) storyline. Ryan’s latest plan is to divert attention away from himself by framing Franco Baldwin (Roger Howarth) for his murders. Ryan has welcomed Franco back into therapy with the goal of getting information that he can use to set Franco up.

But it looks like things might not go so well on that front for Ryan. General Hospital spoilers say that Laura Webber (Genie Francis) will soon be onto the fact that something’s very wrong with “Kevin Collins” (Jon Lindstrom), and she may have a hard time believing that Franco is really the culprit, even after “evidence” starts pointing in Franco’s direction.

After all, if Franco is the Port Charles serial killer, then that means that he killed Kiki Jerome (Hayley Erin), whom he loved like a daughter. It just won’t add up for Laura, nor will Elizabeth Webber (Rebecca Herbst) stand for it that her fiancé is being set up for murders that he didn’t commit.

So it seems that Ryan’s objective in framing Franco may not go as planned. Plus, he’s got Lulu Falconeri (Emme Rylan) on the verge of remembering her attack at any moment. It’s a lot of stress for Ryan. So far, he’s been cool and collected as he’s enacted his murderous plan, but the promo shows him having a breakdown in his office. Could the pressure be getting too much for him, and will he let his dangerous side finally show?