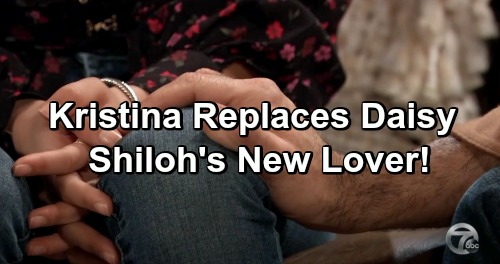 General Hospital (GH) spoilers tease that Kristina Corinthos-Davis (Lexi Ainsworth) is headed for more trouble at Dawn of Day. She’s already been doing some recruiting at this creepy organization. Kristina convinced Sam McCall (Kelly Monaco) to attend a seminar and now Alexis Davis (Nancy Lee Grahn) has attended another one. She’s been eager to help her loved ones see all DOD has to offer.

Of course, Sam hasn’t been impressed at all so far. She grew concerned when Daisy Kwan (Kelsey Wang) had Kristina blaming herself for the behavior of her abusive former boyfriend, Kiefer Bauer (Christian Alexander). It’s obvious Shiloh Archer (Coby Ryan McLaughlin) likes to control his followers through sneaky tactics like that.

Unfortunately, Kristina’s about to sink deeper and deeper into the cult chaos. Shiloh urged Kristina to take Daisy’s place as DOD’s ambassador, so he’s drawing her right in. He’s also been touching her more often. At first, it was a hand placed gently on Kristina’s shoulder. Then, a hand on her knee. Shiloh’s taking his caring persona and slowly moving it into creepier territory.

Sex is part of many cults. It’s common for a charismatic male leader to have a harem of female followers to satisfy him. Sometimes his followers provide sex willingly. In other cases, it’s taken by force.

General Hospital spoilers say Daisy will be off canvas for a while, but she’ll be back down the road. Shiloh suggested that Daisy needed time to reflect on Dawn of Day’s teachings, but he’s probably just ready for a new lead lover. He’s set his sights on Kristina due to her connection to Sam and possibly his attraction to her as well.

GH fans can expect Kristina’s relationship with Shiloh to take a dark turn. Will she basically become his sex slave? Will Shiloh talk Kristina into doing something she feels uncomfortable with? Could he actually make Kristina think this is somehow normal? Anything is possible when a cult’s brainwashing tactics are involved.

Sam intends on conning Shiloh into thinking she’s a needy single. She plans to spread the word about her breakup with Jason Morgan (Steve Burton), which didn’t really happen. Sam will grow closer to Shiloh, but will her plot be successful? Shiloh also knows how to play the game, so General Hospital spoilers say Sam can’t be too careful.

If Sam truly manages to dupe Shiloh and makes him believe she’s falling for his teachings, will he try to pit Kristina against her sister? We’ll give you updates as other GH news comes in. Stay tuned to the ABC soap and don’t forget to check CDL often for the latest General Hospital spoilers, updates and news.