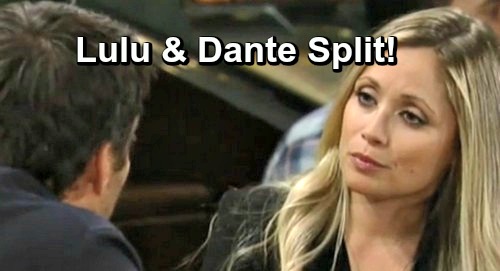 General Hospital (GH) spoilers tease that a big story is about to get underway. Sonny Corinthos (Maurice Benard) recently went to Anna Devane (Finola Hughes) and asked for a favor. He wanted Anna to use her WBS connections and hopefully score some info on Dante Falconeri’s (Dominic Zamprogna) location. Unfortunately, Anna came back with news that it’d be too risky to contact Dante right now.

Dante is deep undercover with some very deadly people. These are the kind of guys who would kill Dante in a heartbeat over one wrong move. Still, that won’t stop Sonny from being curious and concerned. It looks like Sonny will set off a risky chain reaction, so let’s take a look at three upcoming Dante-related bombshells.

In a recent GH scene, Robert Scorpio (Tristan Rogers) surprised Sonny by revealing that he knew Dante’s target. Sonny was taken aback by Robert’s knowledge of the Raj Patel situation, but Robert simply suggested that he tried to keep up. However, it seems there’s much more to it than that. Robert is holding out on this fearful father, but Sonny won’t let him get away with that for long.

General Hospital spoilers say Sonny will grow suspicious soon. He’ll feel like Robert has additional facts regarding this case. Sonny will undoubtedly push Robert to divulge them, but it doesn’t look like Robert will cooperate at first. As a result, GH fans can expect Sonny to take charge in a big way!

Robert is currently working with Dr. Finn Hamilton (Michael Easton) on the mystery virus case. They’ve determined that Dr. Cabot has been living in Sweden, so they’ll land there before you know it. However, it was no coincidence that Sonny interacted with Finn and Robert recently. That was a clue that one storyline will overlap with another one.

It’s possible a hint about Dante will surface during this trip. General Hospital spoilers suggest that Robert and Finn will get involved in Dante’s eventual rescue. Perhaps the search for Dr. Cabot answers will lead to more Dante answers as well. They could play crucial roles in how Dante is discovered. It appears Dante will be held prisoner somewhere, so he’ll definitely need some backup!

General Hospital spoilers say the conflict we’ve seen between Dante and Lulu Falconeri (Emme Rylan) isn’t going away. The danger won’t cancel it out, so expect torn hearts and a strained romance. Dante wasn’t there when Lulu needed him. She nearly died thanks to Ryan Chamberlain’s (Jon Lindstrom) vicious attack, so that should come into play.

Captive Dante will also suffer, but it’s his own fault for leaving his family to pursue this mission. He could’ve easily passed up the chance – well, he could have if Zamprogna hadn’t needed an exit story! Nevertheless, General Hospital spoilers say there’ll be major consequences due to Dante’s decision. Whether that means Lulu will move on or Dante will die, “Lante” may come to an end.

GH viewers won’t want to miss the crazy drama ahead for Dante, Lulu and everyone else linked to the chaos. We’ll give you updates as other details emerge. Stay tuned to the ABC soap and don’t forget to check CDL often for the latest General Hospital spoilers, updates and news.