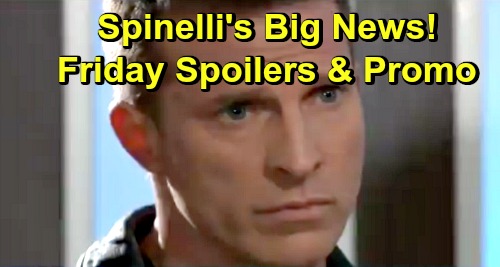 General Hospital (GH) spoilers for Friday, February 8, tease that Scott Baldwin (Kin Shriner) will try to help Franco Baldwin (Roger Howarth) out of his jam. He’ll insist that Jordan Ashford (Briana Nicole Henry) and Margaux Dawson (Elizabeth Hendrickson) won’t be railroading his client after all. Margaux and Jordan will be skeptical, but Scott will hope his latest legal maneuver pays off.

Perhaps Scott will come up with an alibi for Franco. If they can prove he was somewhere else for at least one of the murders, that’d go a long way toward planting setup suspicions. Of course, that wouldn’t completely clear Franco either. Lulu Falconeri (Emme Rylan) is still adamant that Franco attacked her, so his problems are far from over.

Elizabeth Webber (Rebecca Herbst) will remain at the center of this mess. She’ll insert herself in the situation as much as possible and try to make Franco feel her support. Over with “Dr. Kevin Collins” aka Ryan Chamberlain (Jon Lindstrom), he’ll sit down for a tense chat with Dr. Griffin Munro (Matt Cohen). Ryan will wonder if there’s anything Griffin would like to share with him man to man.

After a fight with Ava, Ryan caught her hugging Griffin over the Franco news. Griffin is quickly rising to the top of Ryan’s hit list, so it won’t be long until Ryan officially adds his name! In the meantime, Alexis Davis (Nancy Lee Grahn) will lash out at someone she finds arrogant. Since we know Joe Flanigan will debut as a new character named Neil, maybe he’ll get off on the wrong foot with Alexis.

Neil is a therapist who’ll eventually assist Alexis in more ways than one. It looks like he’s Alexis’ new love interest, but she may feel only rage at first. Elsewhere, Sonny Corinthos (Maurice Benard) will try to be more like Alexis. She wishes Kristina Corinthos-Davis) would choose a more conventional path for herself, but she also doesn’t want to interfere in her adult daughter’s life.

Sonny will tell Kristina he’s behind her as well, but he’ll also offer a warning. He doesn’t trust Shiloh Archer (Coby Ryan McLaughlin), so he’ll note that Shiloh had better take care of Kristina or else. Kristina will smile at Sonny’s overprotective nature and assure him that Shiloh’s a good guy. She won’t want Sonny to worry, but GH fans know he has every reason to.

Other General Hospital spoilers say Shiloh will push Sam McCall (Kelly Monaco) to open up. He’ll press for answers about her relationship with Jason Morgan (Steve Burton) and any lingering issues between them. Sam will maintain that they’re not together and make it seem like there are indeed problems. She’ll do whatever she can to reel Shiloh in and move her plot forward.

Across town, Damian Spinelli (Bradford Anderson) will deliver important updates to Jason. He’ll have more information about Shiloh’s background and DOD efforts. Spinelli will insist that the story checks out, so Jason will mull over the info and wonder how they can gain the upper hand.