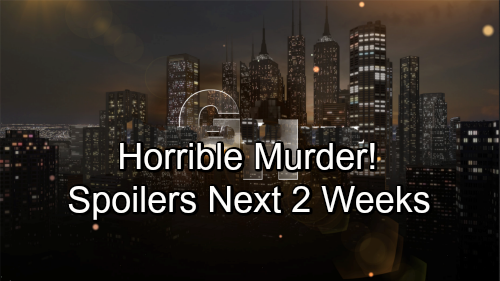 General Hospital (GH) spoilers for the next two weeks tease that some confidants will be needed. During the week of October 22-26, Drew (Billy Miller) will turn to Liz (Rebecca Herbst) for support. He’s been leaning on Sam (Kelly Monaco) lately, but she may be busy helping out Jason (Steve Burton) and Kristina (Lexi Ainsworth). They’ll have some problems to tackle, so Sam may be unavailable.

Then again, Drew may simply decide he shouldn’t push it. He could even just run into Liz and let his emotions pour out. Regardless, she’ll be happy to lend a kind ear. Liz knows what Drew’s going through, so she can offer advice or at least comfort.

Over with Laura (Genie Francis), she’ll face more hiccups in her relationship. Ryan (Jon Lindstrom) is posing as Kevin (Jon Lindstrom), but Laura’s return has brought some complications. As she becomes more and more of a nuisance, Ryan will find new ways to stay apart.

General Hospital spoilers say a neglected Laura will open up to Carly (Laura Wright). That’s significant since Carly did a stint at Ferncliff, where Kevin’s currently being held! She may be able to help Laura solve the mystery eventually.

Ava (Maura West) will also face a difficult blow. That’ll drive her pain and anger as we move into the week of October 29-November 2. General Hospital spoilers say Ryan will draw Ava even closer. He’ll prey on her weak spots as Ava deals with her revenge craving. Later, Ava will have a fierce showdown with Carly (Laura Wright). That’ll lead to some explosive GH scenes for fans!

Next, Mary Pat (Patricia Bethune) will find herself backed into a corner. She could face a murderous Halloween if she’s not careful! Ryan will definitely be out for blood, so don’t be surprised if the bodies pile up fast. Will Kiki (Hayley Erin) be next? Ryan would have a motive since he’s so infatuated with Ava, who hates Kiki’s guts right now.

General Hospital spoilers say Chase (Josh Swickard) will be horrified by a discovery. It sounds like a corpse will be found, so don’t miss that shocker. Over with Finn (Michael Easton), he’ll have some reservations. Anna (Finola Hughes) will come up with a plan, which probably involves more family bonding. She’d like to see Finn completely patch things up with his dad and stepmom.

Will Anna push Finn to meet with Gregory’s (James Read) wife? Finn’s past involves some dark secrets and they seem to be connected to her. Anna may stir up more trouble than she ever anticipated! We’ll give you updates as other GH news comes in. Stay tuned to the ABC soap and don’t forget to check CDL often for the latest General Hospital spoilers, updates and news.