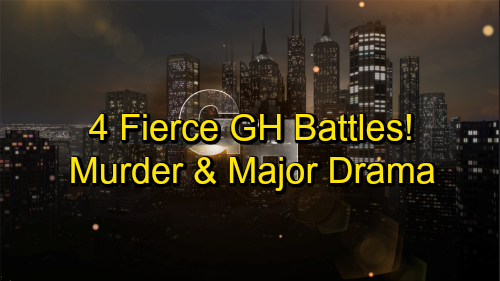 General Hospital (GH) spoilers tease that conflict’s about to erupt in Port Charles. Several characters are gearing up for fierce faceoffs, so let’s take a look at all the drama ahead. Here are four brewing GH battles that fans can look forward to.

When Oscar (Garren Stitt) asked Cameron (William Lipton) to help him out with his plan, General Hospital viewers knew it was a bad idea. Of course, Josslyn (Eden McCoy) just roped Cam into a plot of her own. Now he’s in double the trouble.

Cameron’s supposed to be helping Joss let go of Oscar, but he’s agreed to spark jealousy in her ex instead. General Hospital spoilers say Oscar won’t be happy when he finds out. He may assume their relationship’s legit at first. Josslyn made it Instagram official, so Oscar might indeed deal with some envy.

Oscar wants Josslyn to move on, but probably not with Cameron! He’ll corner his rival and demand some answers, but Cam may think he’s doing Oscar a favor. This is a romantic charade, but Cameron clearly hopes it’ll turn into the real deal.

Laura (Genie Francis) has tried to be patient with “Kevin” aka Ryan (Jon Lindstrom), but enough is enough. Next week, she’ll keep pushing and pushing until a fight breaks out. Laura will want “Kevin” to admit that he’s dragging his feet on a bedroom reunion. Ryan will be forced to think fast and find a way to get Laura off his case. He’ll try to figure it out and devote his time to more sinister interests soon!

That brings us to Ryan’s next battle – although this one will really be more of an attack. General Hospital spoilers say Mary Pat (Patricia Bethune) will get in too deep. She’ll get stuck in a Ferncliff mess on October 30, which could result in a Halloween murder. Will this showdown turn deadly? Ryan’s actions should take a lethal turn at some point, so this could be what begins the destruction.

General Hospital spoilers say November 1 will bring a faceoff as well. Carly (Laura Wright) will manage to get on Ava’s (Maura West) bad side, so expect retaliation. Ava never puts up with much from Carly, but especially not right now. Ryan’s fueling Ava’s dark fire, so she’ll be more riled than ever.

There’s no word yet on what Ava and Carly will spar over, but it doesn’t really matter. The point is they’ll dig up ancient history and deliver plenty of low blows. No matter what causes their latest confrontation, it should be entertaining as usual!

Which GH battles are you anxious to see? Are you rooting for any specific PC residents? We’ll give you updates as other news comes in. Stay tuned to the ABC soap and don’t forget to check CDL often for the latest General Hospital spoilers, updates and news.