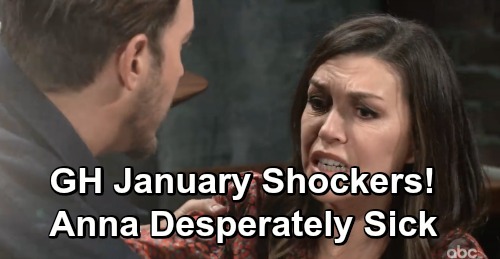 General Hospital spoilers tease that the rest of this week’s new GH episodes, January 9-11, will pack a punch. GH still has several shockers in store for us over the next few days. For starters, there’s the outcome of Cameron Webber’s (William Lipton) court hearing. He’s up against the incredibly tough Judge Carson, so he’ll be sweating bullets before the gavel goes down.

Alexis Davis (Nancy Lee Grahn) is hoping to make Cameron’s legal drama go away. She’ll push the judge to expunge all charges from Cam’s record if he can stay out of trouble for six months or so. Judge Carson may not be too keen on that idea. Alexis pointed out that this particular judge may not have much sympathy for Cam, despite his efforts to help out his extremely sick pal.

Cameron regrets even thinking of buying that weed for Oscar Nero (Garren Stitt), but what’s done is done. He’ll just have to accept whatever decision Judge Carson hands down. Fortunately, we know Cameron will be roaming around and having fun soon. He’ll lead Josslyn Jacks (Eden McCoy) and Oscar on some exciting adventure, so his punishment may not be all that bad.

Meanwhile, Anna Devane (Finola Hughes) has a startling health setback ahead of her. General Hospital spoilers say Anna will look quite ill as she yells for a doctor. GH fans know Anna has a condition called polycythemia vera – or PV for short. It’s a rare blood cancer and it looks like it’ll be the cause of her troubles this week.

General Hospital viewers can expect Dr. Hamilton Finn (Michael Easton) to be a mess over Anna’s ordeal. He already knows how much he cares about Anna, but this will deepen their connection even more. The thought of losing Anna will really shake Finn up, so he’ll do everything he can to help her.

You can get Dr. Griffin Munro (Matt Cohen) will ride to the rescue, too. Anna is an important part of his life, so he’ll want to be there for her. Griffin should appreciate having the distraction from all his rage and sorrow over Kiki Jerome (Hayley Erin) anyway. That loss has really taken a toll on his tender heart, but he’ll stay as soft and loving as ever with Anna.

General Hospital spoilers say Peter August (Wes Ramsey) will visit Anna eventually. It sounds like GH may use this medical crisis as a way to bring this mother and son closer. They’ve been making progress lately, but this could really push them over any final barriers and put them in a good place.

Finally, let’s talk about the election outcome. Will Ned Quartermaine (Wally Kurth) remain Port Charles’ mayor or will Laura Collins (Genie Francis) score a win? Perhaps GH will let Laura have her turn since she was robbed of the chance to run last time. Francis was unexpectedly written off the show, so her character had to drop out of the race. It’s only fair for Laura to achieve victory this time around!

General Hospital fans won’t want to miss all the chaos in PC. We’ll give you updates as other GH news comes in. Stay tuned to the ABC soap and don’t forget to check CDL often for the latest General Hospital spoilers, updates and news.