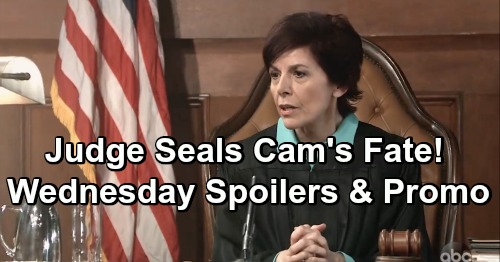 General Hospital (GH) spoilers for Wednesday, January 9, tease that Olivia Quartermaine (Lisa LoCiCero) will have some concerns. For starters, she’ll be worried about the serial killer that’s on the loose. Olivia knows political figures are sometimes targeted, so she’ll fear for Ned’s life as the election results come in.

Of course, Olivia will also have concerns about the election itself. The polls will show Laura Collins (Genie Francis) steadily closing the gap between candidates. This is shaping up to be an incredibly close race, so Olivia may worry that Ned will lose. However, Ned won’t waste his time fretting about that. It’s out of his hands now, so he’ll just sit back and watch the results roll in.

Meanwhile, Mac Scorpio (John J. York) will have a chat with Jordan Ashford (Briana Nicole Henry) and Curtis Ashford (Donnell Turner). They’ll fill him in on their suspicions about a Ryan Chamberlain (Jon Lindstrom) copycat, so Mac will offer a warning. He’ll point out that if someone really is copying Ryan’s style, he’s going to be awfully hard to catch.

GH fans know the real deal is running around committing murders, so that’ll make the case even tougher to solve. Nevertheless, Jordan will reveal what they’ve uncovered to Margaux Dawson (Elizabeth Hendrickson) and hope they can figure this mess out. Margaux will also end up passing along some details to Lulu Falconeri (Emme Rylan) – off the record, of course.

Over with Laura, she’ll have a brief conversation with Sonny Corinthos (Maurice Benard). Laura will insist that she has nothing to hide, so she may be pushing for total transparency when it comes to the public. Sonny might feel like Laura’s issues with “Dr. Kevin Collins” will cause drama, but she’ll focus on the task at hand. Laura just wants to lead the people of Port Charles and make positive changes.

Elsewhere, Carly Corinthos (Laura Wright) will mull over Josslyn Jacks’ (Eden McCoy) fight to save Oscar Nero (Garren Stitt). She’ll understand why Joss’ first instinct is to take action, but she won’t think it’s the right one. Oscar deserves the chance to live the rest of his life like he wants.

Sam McCall (Kelly Monaco) will listen to Carly’s fears and weigh in. She may think Josslyn will settle down and accept Oscar’s fate eventually. Josslyn already seems to be leaning in that direction, so General Hospital spoilers say these teens will try to make the most of Oscar’s final months.

In the courtroom, Alexis Davis (Nancy Lee Grahn) will defend Cameron Webber (William Lipton) as best as she can. Unfortunately, Cam got the judge Alexis was dreading. Judge Carson is a real “hardnose,” so convincing her to go easy on Cameron could be difficult. Alexis will just have to do everything she can and hope that Judge Carson is feeling merciful.