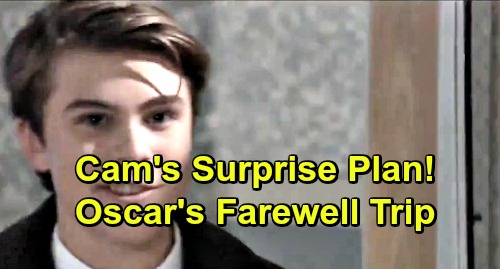 General Hospital (GH) spoilers tease that Cameron Webber (William Lipton) will want to be there for his friends. He’ll do his best to support Oscar Nero (Garren Stitt) and Josslyn Jacks (Eden McCoy) as they deal with the devastating diagnosis. It’ll take a while for Oscar’s fate to really sink in for Joss, but it looks like it ultimately will. She’ll have to face the facts and understand that Oscar’s truly dying.

Dr. Terry Randolph (Cassandra James) has exhausted all options at GH, so Kim Nero (Tamara Braun) and Drew Cain (Billy Miller) are crushed. However, they were at least given the promise of some time. Terry suggested it was too early to say when Oscar will die from his tumor. She’ll have to monitor the tumor’s growth and report back with updates, but she knows Oscar will stick around for a little while.

That goes for Oscar’s girlfriend and pal, too. Cameron and Oscar have had their fair share of issues, but none of that seems to matter now. Oscar needs a friend, so Cameron will step up in the coming weeks. He’ll also serve as a shoulder for Josslyn to cry on. She won’t want to burden Oscar with her tears over what he’s facing. Joss may think Oscar has enough to deal as he accepts his imminent death.

On January 15, General Hospital spoilers say Cameron will let Josslyn lean on him. She’ll be incredibly grateful after he lets her vent and offers advice. Josslyn will be glad that Cam’s still in her life and will continue to be there. She’s certainly going to need someone after Oscar’s death.

Of course, Josslyn and Cameron won’t want to think about that yet. It seems Cam will have a much better idea. Oscar’s final months don’t have to be all doom and gloom. There are still plenty of things Oscar wants to enjoy and accomplish. He can’t check every item off his bucket list, but Cameron may think they should check off as many as they can.

General Hospital spoilers say the teens will all go on an interesting adventure and Cam will be the ringleader. They may stir up some mischief along the way, but it’ll be worth it. Perhaps Cameron and Josslyn will make the rest of Oscar’s short life as fulfilling as possible. He deserves to go out with a bang instead of crawling into a hole and shutting out the world.

It sounds like GH has some bittersweet moments in store. Cameron’s big adventure may help Josslyn say goodbye and prepare to let go. We’ll keep you posted as other news comes in. Stay tuned to the ABC soap and don’t forget to check CDL often for the latest General Hospital spoilers, updates and news.