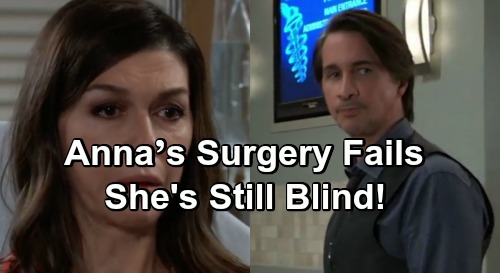 General Hospital (GH) spoilers tease that Anna Devane (Finola Hughes) will need emergency surgery. Dr. Griffin Munro (Matt Cohen) pointed out that a laser treatment could help restore Anna’s sight, but there are no guarantees. He’ll hope this plan pays off, but it’ll soon be a waiting game.

Dr. Hamilton Finn (Michael Easton) will certainly worry about Anna as she goes through this ordeal. Anna admitted that she was scared, so Finn will stay right by her side every step of the way. He’ll want Anna to know she’s got plenty of love and support.

Finn will remain optimistic about Anna getting her sight back. However, Anna may decide she’d rather not get her hopes up. She’ll be stoic in the face of adversity and show great strength as she prepares for the worst.

Anna is a strong woman who can adapt and tackle about any challenge. She’ll be terrified, but she’ll also tell herself she can handle whatever the outcome of this surgery might be.

After Anna’s operation, she’ll be wheeled into her room at GH to recover. Once it’s time for the bandages to come off, it’ll be Finn who does the honors. He just might be even more nervous than Anna. Finn has really fallen hard, so it’ll break his heart to see Anna suffering. He’ll just hope they can put all this behind them soon.

Will Anna be able to see following the surgery? There’s no confirmation on that yet, but this wouldn’t be much of a General Hospital story if her vision’s already fine again. Griffin confirmed that Anna had a vitreous hemorrhage, but he doesn’t know what caused it. There’s a deeper reason behind Anna’s blindness that Finn will end up looking into.

That could mean that the surgery will fail. After all, what would be the point of Finn seeking answers otherwise? If Anna’s good to go, why would they care what caused her to go blind briefly? It’d just be a fleeeting nightmare to brush past, not something worthy of a big mystery storyline – which is where this hot plot is headed.

General Hospital spoilers say Finn may seek alternative solutions for Anna. His next adventure may be about pinpointing the reason Anna went blind and discovering how to fix the problem. We’ll give you updates as other GH news comes in. Stick with the ABC soap and don’t forget to check CDL often for the latest General Hospital spoilers, updates and news.