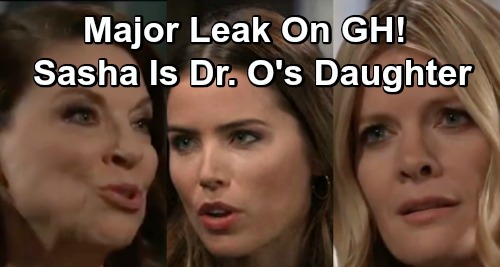 General Hospital (GH) spoilers reveal that Sasha Gilmore (Sofia Mattsson) may be off canvas, but she’s still very much a part of the drama. Now that Liesl Obrecht (Kathleen Gati) is holding the fake daughter secret over Valentin Cassadine (James Patrick Stuart), Sasha’s name is coming up a lot. She won’t steer clear of Port Charles forever, so GH fans can expect Sasha’s comeback down the road.

Of course, Sasha may not return under the happiest of circumstances. She might be forced to come to explain her side of the story after the scheme explodes. Then again, Sasha could return just in time for the revelation itself. Sooner or later, Nina Reeves (Michelle Stafford) will have to learn that this isn’t her daughter.

However, that doesn’t mean Sasha isn’t a relative. Based on the information GH gave us, it doesn’t look like Sasha’s DNA was ever tested. Valentin swiped Madeline Reeves’ (Donna Mills) DNA to use for the tests, which naturally matched up with Nina. Since the truth about Sasha’s DNA is unknown, she could still be part of Nina’s extended family.

Nina offered what might’ve been a crucial clue during her latest chat with Liesl. As she gushed about her daughter at Crimson, Nina pointed out that Sasha looked just like Britt Westbourne (Kelly Thiebaud). She even suggested that Sasha resembled Nathan West (Ryan Paevey) a little bit.

That led Liesl to fire back that Sasha was nothing like Nathan. She insisted that there’s something Nina needs to know about Sasha, but she won’t divulge the truth about Valentin’s plot on Monday’s new GH episode, January 14. Instead, Liesl will simply argue that Nina’s joy will turn to disappointment eventually. She’ll feel confident that Nina will one day see that Sasha isn’t all she’s cracked up to be.

General Hospital has been focused on the Nina side of things, but about Liesl? Is there a chance Sasha is her biological child? Her reaction to Sasha made it seem like she knew more than she was letting on. It’s like Liesl has pure rage for Sasha and she doesn’t even know her – or does she? Has Liesl kept tabs on some secret daughter she gave up?

Perhaps Liesl even reached out to Sasha somewhere down the line and got betrayed. Anything might’ve happened off screen. Regardless, it seems significant that GH cast someone who looked so much like Britt. It seems even more significant that they had Nina specifically mention that resemblance. Adding Nathan to the mix makes it even more likely that Sasha is part of Liesl’s brood.

Valentin is so worried about keeping his own secret that he may not realize Liesl could have one of her own. Even Sasha may know the truth, so there’ll be several ways for Valentin to get blindsided. Having a real connection to someone on canvas could keep Sasha around – and potentially keep her as part of Nina’s family!