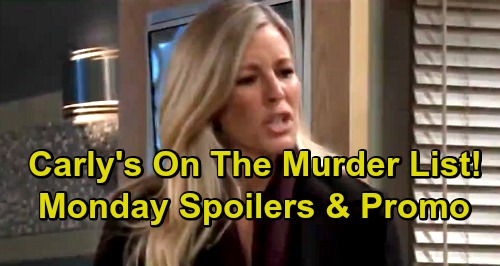 General Hospital (GH) spoilers for Monday, January 14, tease that Valentin Cassadine (James Patrick Stuart) will spread the good news. He’ll stun Curtis Ashford (Donnell Turner) by revealing that he’s back together with Nina Reeves (Michelle Stafford). Valentin will undoubtedly thank Curtis for playing a part in that. He used an unwitting Curtis as a pawn in his fake daughter plot, so he’ll express his gratitude.

Meanwhile, Liesl Obrecht (Kathleen Gati) will give Nina a stern warning. She’ll insist that her joy will turn to disappointment one day. Liesl will discourage Nina from getting too attached to Sasha Gilmore (Sofia Mattsson). She won’t think Nina should be putting all this faith in Valentin either. By the end of this conversation, Nina may be left to wonder what she’s info missing and how Sasha fits into it.

Over with Sam McCall (Kelly Monaco), she’ll fill Alexis Davis (Nancy Lee Grahn) in on her latest concerns. Alexis will realize this is about Kristina Corinthos-Davis (Lexi Ainsworth) and her new living arrangement. She’ll ask what exactly is going on in the DOD house that she needs to know.

Sam won’t be sure and that’s the problem. Shiloh Archer (Coby Ryan McLaughlin) clearly has an agenda, but Sam and Jason Morgan (Steve Burton) haven’t figured out what he has in mind yet. General Hospital spoilers say Sam will just want Alexis to be aware of the potential danger. Even though Sam will offer her support to Kristina later, she’ll still have a bad feeling about Shiloh’s grip on her sister.

Elsewhere, Jason will talk to Sonny Corinthos (Maurice Benard) about the Shiloh situation. He’ll wonder if Kristina’s ever mentioned that name to Sonny. Of course, Sonny doesn’t spend much time with Kristina these days. He probably isn’t very in the loop, so he may feel bad when he hears about Shiloh’s shadiness.

Fortunately, Jason is on the case. He’ll vow to protect Kristina and hope he can put Sonny’s mind at ease. At GH, Carly Corinthos (Laura Wright) will catch Franco Baldwin (Roger Howarth) off guard. He was upset after “Dr. Kevin Collins” aka Ryan Chamberlain (Jon Lindstrom) dropped him as a patient, so he broke into Kevin’s office to get his medical records.

When Carly finds Franco digging around, she’ll ask what he’s doing ransacking the place. Carly may urge Franco to scram before Kevin returns and causes a fuss. However, it’ll be Carly who truly lands in hot water on Monday’s new GH episode, January 14.

General Hospital spoilers say Ryan will put another name on his murder list. GH fans can expect it to be someone from the Corinthos clan, so this has Carly written all over it.

Before Ryan gets to that, he’ll push Ava Jerome (Maura West) to accept his suggestion. Ryan just told Ava he thinks they should leave Port Charles together, so she’ll be thrown for a loop. Ava will get confirmation that Ryan indeed wants to move away with her. He’ll be ready for a bright future, but Ava will find a reason to stay.

Perhaps Ava will think this is the only place that’ll help her keep Kiki Jerome’s (Hayley Erin) memory alive. She also has her gallery to think about and of course, revenge. Ava can’t rest until she makes the killer pay the price, so Ryan will be stuck in a bit of a jam.