General Hospital Spoilers: Ashton Arbab Back as Dev – Arrives In PC, Surprises Sonny and Shakes Things Up for Joss and Cam 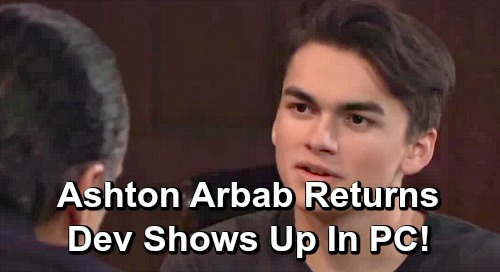 General Hospital (GH) spoilers tease that a familiar face will pop up in Port Charles. When Sonny Corinthos (Maurice Benard) was searching for Dante Falconeri (Dominic Zamprogna) in Turkey, he got some help from a teen named Dev (Ashton Arbab). Both the character and actor were an immediate hit with GH fans. If you were one of the viewers calling for more Dev, you’re in luck. He’s headed to PC!

After summer General Hospital spoilers pointed to a surprise visit for Sonny, CDL predicted Dev might make his way to town. It turns out Dev will indeed kick off a fun return stint starting June 20. Of course, GH will undoubtedly offer a wild explanation for how and why Dev tracks Sonny down. It looks like Sonny might take the kid under his wing, but he’ll need a favor in return.

Josslyn Jacks (Eden McCoy) is understandably struggling with grief right now. Losing Oscar Nero Quartermaine (Garren Stitt) has been one of the most painful experiences of her life. Unfortunately, Josslyn just got some seemingly horrible advice from Maxie Jones (Kirsten Storms). When Joss regretted never saying a real goodbye to Oscar, Maxie was quick to suggest reaching out through a séance.

It seems like it’d be better to just send Josslyn to Oscar’s Meadow and let her say goodbye there. Maxie could be setting Joss up for disappointment if the séance provides no response or leads to creepier results than she’s expecting. However, that’s Maxie for you. She’s always got a plan; it’s just usually an iffy one. Maxie means well at least!

General Hospital spoilers say Josslyn could head down a risky path due to this and Dr. Kim Nero’s (Tamara Braun) spinout. Watching Oscar’s mom lose control could make things even tougher on Joss. That brings us back to Dev. Sonny wants to keep an eye on Josslyn, but he can’t do that without cramping her style. Dev, on the other hand, can grow closer to Joss and watch over her with ease.

Josslyn might lash out when she realizes this is Sonny’s setup, but Dev may be crushing on her by then. This seems like the perfect setup for a soapy love triangle. Cameron Webber (William Lipton) and Dev may end up competing for Josslyn’s heart once she’s ready to move on from Oscar. It could be a fun story that’ll have fans rooting for both sides.

Are you glad Ashton Arbab is headed back to General Hospital? Are you hoping Dev and Cameron battle over Josslyn? We’ll give you updates as other GH news comes in. Stay tuned to the ABC soap and don’t forget to check CDL often for the latest General Hospital spoilers, updates and news.