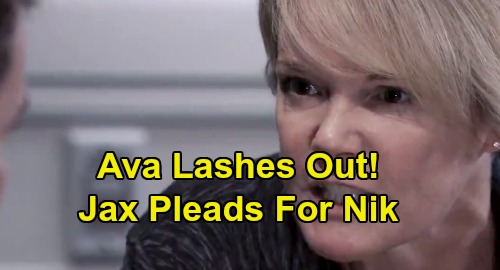 General Hospital (GH) spoilers tease that Ava Jerome (Maura West) has some surprises headed her way. She’ll be spooked by a noise at Shadybrook, where she checked herself in following her encounter with Nikolas Cassadine (Marcus Coloma). Laura Webber (Genie Francis) naturally didn’t believe Ava, which led to Ava doubting herself as well. Ava decided she needed help, but now it’s Ava’s help that’s needed!

Jax is a devoted father and can understand that Ava’s suffered the worst loss imaginable. She’s already lost Kiki Jerome (Hayley Erin), so she doesn’t deserve to lose Avery Corinthos (Ava and Grace Scarola), too – especially when she’s not actually crazy.

Laura’s concerned about Sonny Corinthos (Maurice Benard) trying to go after full custody, so she pushed him not to use this against Ava. Unfortunately, Sonny couldn’t make any promises. Since Jax appears to be the designated person to put out fires, he’ll pay Ava a visit this week. Jax may sneak in and startle Ava, but what he has to say should leave her truly stunned – and furious.

GH’s weekly promo shows Ava snarling, “You will NEVER take advantage of me!” Jax is sitting across from Ava and looks ready to continue a pitch. This doesn’t rule out other shocking visitors for Ava, but it does point to Ava potentially learning Nik’s secret. General Hospital spoilers say Ava will keep her mouth shut about something later this week, so let’s consider how this might play out.

There’s one thing that unites everyone involved in this whole scheme. Jax and Hayden Barnes (Rebecca Budig) both stand to gain financially from the codicil hunt, but it’s Spencer Cassadine (Nicholas Bechtel) they’re really fighting for. Ava also has a soft spot for the kid and would want to help. There’s also the matter of Ava’s recanted statement against Valentin Cassadine (James Patrick Stuart), which Nikolas is still bitter about.

General Hospital spoilers say Jax will reveal that Nikolas is indeed alive and explain their reasons for staying tight-lipped. Ava should be livid to know she’s committed herself for no reason, but Jax will likely work hard to win her over. He may present this as Ava’s chance to make amends with Nikolas and make things right for Spencer. All Ava has to do is stay put and keep quiet.

Ava might agree on one condition: If Sonny uses this to cut Ava out of Avery’s life, the deal may be off. That’s where Jax and his upcoming confession to Carly Corinthos (Laura Wright) could come in. He’ll spill a major secret that Carly has to keep from Sonny, so all the pieces line up here. Carly may be brought in the Nikolas loop and do her best to help Ava for Spencer’s sake.

Of course, Jax has to settle Ava down and get her on board first! General Hospital fans won’t want to miss Ava’s fierce outburst and Jax’s desperate plea. We’ll give you updates as other GH news comes in. Stay tuned to the ABC soap and don’t forget to check CDL often for the latest General Hospital spoilers, updates and news.