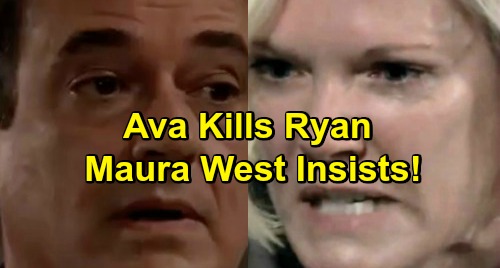 General Hospital (GH) spoilers tease that Ava Jerome (Maura West) will continue to reel over the Ryan Chamberlain (Jon Lindstrom) revelation. She thought she’d finally found someone who would love her without trying to change her. “Dr. Kevin Collins” didn’t judge Ava and even embraced what most would consider her flaws.

Ryan treated Ava like a goddess, so her world came crashing down when the truth was revealed. Ava’s struggling to accept that she fell for not just any serial killer, but the one who murdered her daughter. Kiki Jerome’s (Hayley Erin) death is definitely the hardest part of all this.

If it hadn’t been for Kiki’s demise, Ava probably could’ve just lashed out and moved on. Instead, Ava is drowning in grief, anger and self-loathing. She just can’t cope, so how is she ever going to move past this Ryan debacle?

There’s probably only one way to truly put this GH ordeal behind her. Of course, we’re talking about revenge. That’s the language Ava speaks in. Part of the problem here is that Ava doesn’t know how to just be in pain. She prefers to get payback, but she can’t do that if Ryan remains presumed dead.

Ava didn’t get any closure and that’ll be case until she gets a chance to finish Ryan off. Ever since Ryan killed Kiki, General Hospital fans have been calling for Ava to return the favor. It’s certainly something her character would do, so why not? Even Maura West herself feels like that’s the only acceptable outcome.

In an interview with Soap Opera Digest, West insisted that Ava needed to be the one to do the deed. “If Ava Jerome doesn’t get to kill that guy, I am going to my grave with the biggest regret of my career,” West said. “There had better be something, and it had better be good! I wish that for her.”

West is exactly right. This has to happen. Until Ava stabs Ryan, pumps a bullet in his heart or finds some other deadly strategy to get rid of him, this story won’t reach a satisfying conclusion. General Hospital spoilers say Ryan could indeed be headed back to Port Charles soon, so don’t miss what’s in store.

Do you agree that Ava should kill Ryan? For a woman like Ava, that may be the only thing that’ll keep her sane and moving forward! We’ll give you updates as other GH news comes in. Stay tuned to the ABC soap and don’t forget to check CDL often for the latest General Hospital spoilers, updates and news.