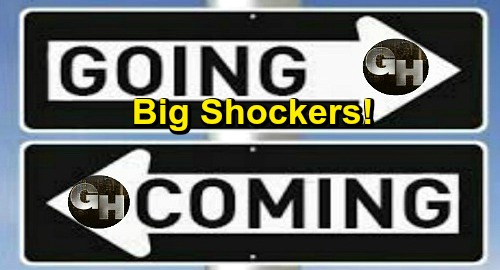 General Hospital (GH) spoilers reveal that we’ve got some comings and goings news to pass along. Let’s talk about some big departures. Sonny Corinthos (Maurice Benard) went to Turkey on a mission to bring Dante Falconeri (Dominic Zamprogna) home, and the plan paid off. However, the conclusion of Sonny’s mission meant saying goodbye to two other characters.

Dev (Ashton Arbab) was quite helpful to Sonny during his time in Turkey. Without Dev’s assistance, Sonny probably never would’ve been reunited with his son. He returned the favor by saving Dev’s life in a serious showdown, so now they’re even. Of course, there’s always a chance we’ll see Dev again – maybe even in the form of a brand-new character.

Many GH fans were impressed with Arbab and would love to see him join the teen scene in Port Charles. Oscar Nero’s (Garren Stitt) death is imminent, so that’ll just leave Josslyn Jacks (Eden McCoy), Cameron Webber (William Lipton) and Trina (Sydney Mikayla). Arbab could easily be cast as Trina’s love interest or even become part of a love triangle with Joss and Cam.

Since Arbab and McCoy happen to be friends in real life, they would undoubtedly love working together. Time will tell if Arbab lands a more permanent GH gig, but plenty of viewers are rooting for it! The end of Sonny’s mission also brought the end of Dante’s when he shot and killed Raj Patel (Noshir Dalal). Unfortunately, Raj will get his revenge in a different way.

General Hospital spoilers say Dante will be haunted by his whole experience in Turkey, so that’ll bring some issues to tackle. Lulu Falconeri (Emme Rylan) will worry about Dante as his nightmares become tough to bear. Some shocking episodes will explore what Dante’s been through and how it’s affecting him.

On Twitter, Cohen discussed the wild ride and offered plenty of gratitude. He tweeted, “Tough day. Emotionally. My last episode of @GeneralHospital aired. And @cw_spn announced its final season. I am grateful to all the fantastic casts, crews, and fandoms I have been able meet along the way. It’s all those experiences that have helped me grow into the man I am today.”

Tough day. Emotionally. My last episode of @GeneralHospital aired. And @cw_spn announced its final season. I am grateful to all the fantastic casts, crews, and fandoms I have been able meet along the way. It’s all those experiences that have helped me grow into the man I am today