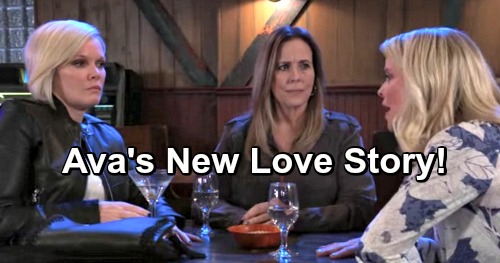 General Hospital (GH) spoilers tease that Ava Jerome’s (Maura West) dangerous plan will move forward. During a recent meeting with Laura Webber (Genie Francis) and Felicia Scorpio (Kristina Wagner), Ava considered what her next steps would be. Felicia pointed out that Ryan Chamberlain’s (Jon Lindstrom) inflated ego is his biggest weakness, and Laura backed her up on that.

When Dr. Kevin Collins (Jon Lindstrom) drew attention to Ryan’s mistakes, he made more mistakes. Ryan hates losing or feeling like he’s not top dog. Felicia suggested that the best way to lure Ryan out of hiding would be for Ava to find a new man and flaunt him. That’s exactly what Ava will plan to do, but her plan could hit some snags.

General Hospital spoilers say Ava will seek out Scott Baldwin (Kin Shriner) next week. It’s easy to see why based on Ava’s conversation with Felicia and Laura. Ava will likely push Scott to be her pretend boyfriend. She’ll think they should act like they’re dating and hopefully stir up the necessary jealousy in Ryan.

However, GH viewers can expect Scott to reject the idea. Will he eventually come around or will Ava have to turn elsewhere for assistance? There’s a chance Scott will opt to help Ava in the end. If not, there’s surely someone else Ava could pretend to date.

No matter how this plays out, General Hospital could be setting up a genuine love connection. Whether Ava ropes Scott into this or another GH character, this could become a classic “fake feelings become real feelings” story. It’d be particularly easy to do that with Scott and Ava, who already have a solid friendship. That’s especially true if this results in extreme danger as we expect it will.

General Hospital spoilers say Ava could fall right into a new storyline about love and hope. That’s be great news since she’s been so bitter and distraught over Ryan. She lost the man she thought she loved. and her daughter was killed because of her involvement with him. Kiki Jerome’s (Hayley Erin) death had already taken a toll on Ava, but this whole Ryan ordeal really pushed her over the edge.

Ava deserves a fresh start with someone she cares about. She just needs someone who’s not a deranged murderer this time! Will Ava get the peace and love she’s craving? That’ll hopefully come sooner or later, but not before Ava gets a good dose of vengeance.

General Hospital fans won’t want to miss the shockers ahead. We’ll give you updates as other GH details emerge. Stay tuned to the ABC soap and don’t forget to check CDL often for the latest General Hospital spoilers, updates and news.