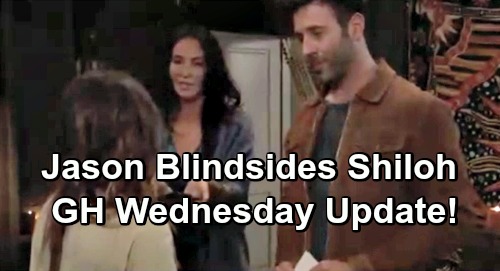 General Hospital (GH) spoilers for Wednesday, April 10, tease that Sonny Corinthos (Maurice Benard) will assure Alexis Davis (Nancy Lee Grahn) that his strategy is the right one. He’s convinced that kidnapping Kristina Corinthos-Davis (Lexi Ainsworth) is the only solution, so he’ll tell Alexis it’s absolutely necessary. Sonny will contend that they have to act now and worry about the consequences later.

Alexis and Sonny will agree that Kristina isn’t going to like this. They’ll risk alienating Krissy in a big way, but what else can they do? They can’t let Kristina stay in this toxic place any longer. Jason Morgan (Steve Burton) will be on the same page as he heads off to save her. He’ll let Sam McCall (Kelly Monaco) know that it’ll be a quick in and out at the DoD house. Jason intends to just grab Kristina and run.

Kristina will feel both excited and uneasy as the rest of her ritual begins. GH spoilers say Harmony (Inga Cadranel) will hand over a cup of something that’s apparently drugged. She’ll suggest it’ll soothe Kristina’s nerves, but this is undoubtedly about getting her relaxed and submissive. That’ll be the ideal state for the sex session Shiloh Archer (Coby Ryan McLaughlin) has in store.

Fortunately, our usual hero Jason will swoop in and play Superman. Kristina should disappear from the attic with Jason’s help, so Harmony will sound the alarm. When Shiloh arrives to take a look, Kristina will likely be long gone.

Other General Hospital spoilers say Peter August (Wes Ramsey) and Maxie Jones (Kirsten Storms) will navigate their new romance. As Peter stands outside Maxie’s door, she’ll ask if he’s staying or going. Peter may decide to be a gentleman and not rush things with Maxie. He truly cares about her, so it’s wise to build to the next phase slowly.

Then again, Maxie and Peter have been inching toward lovemaking for a while now. They could be tempted to indulge in some passion. Still, holding off seems more likely based on what we know about these two. Peter and Maxie may save sex for another night in the not-so-distant future.

What about Harrison Chase (Josh Swickard) and Willow Tait (Katelyn MacMullen)? Will they be ready to take the plunge? General Hospital spoilers reveal that Chase will offer Willow an interesting gift. It’ll be a great finish to their evening of roller skating and funny stories. Sparks are really flying here, so this might be when Willow and Chase will finally hit the sheets.

Elsewhere, Anna Devane (Finola Hughes) will fret about Robin Scorpio-Drake (Kimberly McMullough). Thanks to a memory mix-up, Anna won’t be sure that Robin is her daughter. She’ll worry about how things will change between them if she’s not Robin’s bio mom, but Dr. Finn Hamilton (Michael Easton) will provide comfort. He may remind Anna that no one can take away the bond they’ve established.

Of course, General Hospital almost certainly won’t make Alex Devane Marick (Finola Hughes) Robin’s mother. This is probably a stepping stone to Anna figuring out Peter isn’t her son. GH buzz has been pointing to that for months, so let’s hope Anna uncovers some clues soon.