General Hospital Spoilers: Ava’s Gruesome Plans in Jeopardy – Can She Go Through with Ryan’s Murder? 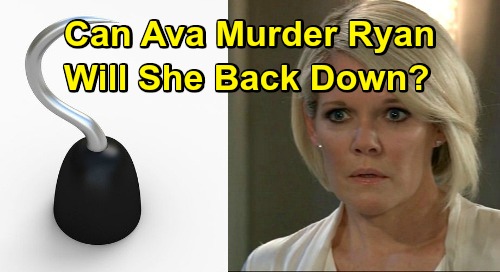 General Hospital (GH) spoilers tease that Ava Jerome (Maura West) will move forward with a deadly plan. She’s without a doubt a cold-blooded killer, but can she murder the man she grew to love? Can Ava really kill Ryan Chamberlain (Jon Lindstrom)? Ava could face doubts when it finally comes time to pull the trigger or perhaps plunge the knife.

Ava murdered Connie Falconeri (Kelly Sullivan) to keep Julian Jerome’s (William DeVry) identity a secret when he first returned to Port Charles. She’s part of a mob family, so she doesn’t hesitate when someone needs to be taken out. Ava also turned against her daughter, Kiki Jerome (Hayley Erin) and wanted her punished for what she saw as a betrayal. She’s pretty much didn’t care about anyone other than herself until Ryan came along.

Ryan fell hard for Ava when he took over Dr. Kevin Collins’ (Jon Lindstrom) life. Ava’s rage over Kiki and Griffin Munro’s (Matt Cohen) relationship only made Ryan more attracted to her. The same went for her animosity toward Sonny Corinthos (Maurice Benard) and Carly Corinthos (Laura Wright). Ryan truly loved that fierce side of Ava and wanted to draw it out even further.

Ava’s ranting about wanting people dead convinced Ryan they were meant to be together, so he divorced Kevin’s wife, Laura Webber (Genie Francis). Ryan was determined to make Ava his wife and live happily ever after in their own murderous world. He became as obsessed with Ava as he was Felicia Jones (Kristina Wagner), so this was a dangerous connection.

Ryan had nothing against Kiki other than the pain she brought to Ava’s life. He murdered Ava’s daughter because he thought it would please her in some twisted way. That didn’t work out like Ryan planned, but he still tried to show his love. He gave Ava the attention and admiration she had always craved. GH fans know Ryan embraced Ava for who she is and never wanted to change her.

The problem was that Ava fell for Ryan as Kevin. She thought he was this perfectly sane shrink who somehow managed to think of her as a goddess. Instead, Ava loved one of General Hospital’s worst monsters – one that was ruthless enough to murder Kiki and have sex with Ava to form an alibi.

In other words, Ryan was the perfect man for Ava until she learned the truth. In their seemingly inevitable showdown, he may use what she thought she felt for him against her. Ava has vowed to kill Ryan for what he did to Kiki, but will she actually be able to go through with it?

General Hospital spoilers say Ava will have to make some tough decisions. She may end up turning the tables on Ryan and making him think she still adores him. Ava could easily lure Ryan with the promise of a bright future only to kill him in the end.

It sounds like some exciting developments are ahead on General Hospital. We’ll give you updates as other GH news comes in. Stay tuned to the ABC soap and don’t forget to check CDL often for the latest General Hospital spoilers, updates and news.