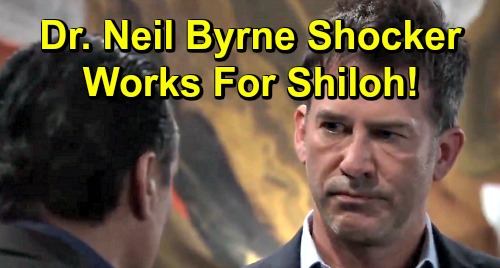 General Hospital (GH) spoilers reveal that Dr. Neil Bryne (Joe Flanigan) may have something to hide. He’s been a bit suspicious from the first day he ever appeared in Port Charles. Some GH fans thought Neil might be associated with the Cassadines, but perhaps there’s another explanation that fits in the show’s biggest storyline.

This intriguing therapist didn’t show up in PC until after Shiloh Archer (Coby Ryan McLaughlin) and Dawn of Day arrived. Alexis Davis (Nancy Lee Grahn) is Kristina Corinthos Davis’ (Lexi Ainsworth) mother, and Kristina is Shiloh’s latest mark. Neil is learning all kinds of secrets about Alexis as her therapist, but he can only use this information if she’s a threat to herself or someone else.

However, police could subpoena Neil’s records if they’re important to a case, just like they did with “Dr. Kevin Collins” (Jon Lindstrom) aka Ryan Chamberlain (Jon Lindstrom) and his file on Franco Baldwin (Roger Howarth). Regardless, Neil is playing a larger role in this story now. Sonny Corinthos (Maurice Benard) has hired Neil to help Kristina free from this cult mentality.

Will Neil truly assist Kristina? Does he have a dark agenda instead? Sonny is Kristina’s father, and Neil may believe he can get inside information while pretending to help. Since Sonny’s a mob boss, Neil might think he can use that to his advantage. Little does Neil know that attempting to cross Sonny could backfire big time! If Neil is planning to take Sonny for a ride, he might get taken for one himself.

Neil seems to be very knowledgeable of cults, which is somewhat odd. Most therapists don’t have his apparent level of experience with them since people don’t usually escape. Joining a cult means joining for life in most cases, so members who try to get out are often killed.

Could Neil have a family member that was associated with a cult or is he covering his bases as a cult member himself? Is Neil merely gathering intel for Shiloh? General Hospital spoilers say Neil’s arrogant, shady demeanor is a red flag. He’s just too sure of himself to not be up to something.

It’s possible that Neil is not only a member of DOD but has mentored in brainwashing techniques. Shiloh knows how to charm his cult members, but some methods are learned and don’t always come naturally. Neil could be helping Shiloh without anyone even knowing he’s involved.

Many General Hospital viewers can tell Neil is too good to be true, but what is he up to exactly? Will he be caught before anyone gets hurt? We’ll give you updates as other GH news comes in. Stay tuned to the ABC soap and don’t forget to check CDL often for the latest General Hospital spoilers, updates and news.