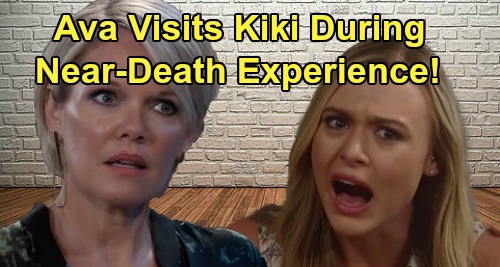 General Hospital (GH) spoilers tease that Ava Jerome (Maura West) will remain a tortured soul. She’s desperate for Kiki Jerome (Hayley Erin) closure, but her daughter’s putting up a fierce fight. Kiki has made it crystal clear to Ava’s psychics that she doesn’t forgive Ava and doesn’t want to reconnect. She’s holding a grudge in the beyond, but Ava will still long to repair their bond somehow.

Of course, Ava’s limited in how she can do that. Kiki isn’t budging, and it’s not like Ava can just call her up or stop by. She’s been dependent on her psychics so far – first Sibley Gamble (Veronica Cartwright) and now Chelsea Lambas (Jen Ray). However, there’s only so much Chelsea can do. If Kiki is unwilling to listen to Ava, there’ll be no chance for her to make amends.

This storyline is hopefully building to the closure Ava craves, but how’s she going to achieve it? What could possibly make Kiki truly hear her mom out? Things will get worse for Ava before they get better. She’ll have an awful night’s sleep as she reflects on the pain she caused and Kiki’s continued rejection.

Ava’s dreams will be haunted, so she’ll be left feeling frustrated and hopeless. She may begin to wonder if she should just give up, but help could come from an unlikely source. General Hospital spoilers say a special delivery will arrive for Ava on August 30. She’ll receive a letter from Ryan Chamberlain (Jon Lindstrom), which will be full of dangerous passion. Reading it should be rather unsettling for Ava.

It’s easy to see that Ryan is never going to let Ava go. He views her as this perfect goddess and can’t get her out of his head. GH could’ve just locked Ryan up and never shown him again, but they’ll been giving us popups along the way. There’s likely a good reason for that. Ryan seems poised to escape and go after Ava, which could be a blessing in disguise – or at least a nightmare with a silver lining.

Will Ryan once again try to make a getaway with Ava? She would inevitably refuse, which could lead Ryan to resort to a familiar plan. General Hospital fans will recall how Ryan nearly killed them both. He planned to hurl them both off that bridge near Niagara Falls. Ryan would rather be united with Ava in death than alive and apart on earth.

It’s possible General Hospital is setting up a near-death experience for Ava. Could she land in a coma and almost cross over to the other side? Will Ava have what she really needs, which is a shot at talking to Kiki herself? If Ava could cut out the go-between and just make her heartfelt plea, maybe these two could finally get somewhere. Kiki could even urge Ava to return to her body since it’s not her time.

That might be the perfect conclusion to this long and winding path to forgiveness! We’ll give you updates as other GH news comes in. Stay tuned to the ABC soap and don’t forget to check CDL often for the latest General Hospital spoilers, updates and news.