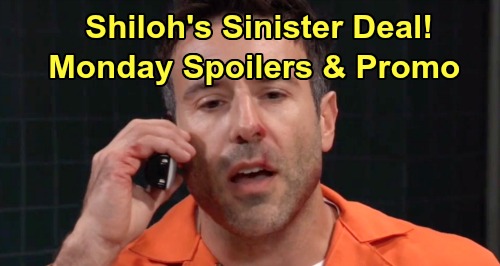 General Hospital (GH) spoilers for Monday, August 19, tease that Julian Jerome (William deVry) will have a chat with Sam McCall (Kelly Monaco). Their relationship is complicated to say the least, but Julian will hope to take a step in the right direction. He’ll fill Sam in on his plans to leave town with Kim Nero (Tamara Braun) and suggest he was hoping to say a proper goodbye.

While Julian bids Sam farewell, Shiloh Archer (Coby Ryan McLaughlin) will reflect on the past. He’ll have a flashback that involves a meeting with Helena Cassadine, so Constance Towers will make an exciting return in Monday’s GH episode. Shiloh will also call someone from jail and insist he has information this person would find interesting. He’ll hope for a meeting that could potentially get him out of this mess.

Over with Elizabeth Baldwin (Rebecca Herbst), she’ll question Hayden Barnes’ (Rebecca Budig) decision. Hayden just showed up and announced she’s moving in, but Liz will have doubts about this arrangement. She’d love to have her sister around, but she’ll wonder if Hayden really knows what she’s doing. Liz may point out she’s got three rambunctious boys to wrangle daily.

However, Hayden loves Liz’s kids and wants to be there for the whole family. Since Franco Baldwin (Roger Howarth) can’t recall his life with them, Hayden will think it’s important to step up. Speaking of Franco, he’ll be forced to cool his heels behind bars. After Franco punched Harrison Chase (Josh Swickard), he was arrested for assaulting a police officer. That’ll give Franco some time to think.

Jason Morgan (Steve Burton) will eventually pay Franco a visit, but their conversation will be calmer this time. It looks like the reality of the situation will finally hit Franco. He’ll ask Jason how something like this happens as he frets about feeling like one man and actually being another. Franco’s Drew Cain (Billy Miller) memories feel quite real to him, so he’ll continue to struggle on Monday.

As for Scott Baldwin (Kin Shiner), he’ll be upset over Franco’s predicament. Scott will tell Drew he needs to see his son, but Drew may worry that’s not such a good idea. Franco might need more space as he tries to cope. Of course, Scott can be pretty stubborn. He may decide their meeting has to happen now, but this is sure to be heartbreaking no matter when it happens. Franco won’t remember Scott at all.

Later, Drew and Curtis Ashford (Donnell Turner) will join Liz at her place. They may want to provide updates on the latest drama and see how Liz is holding up. At home, General Hospital spoilers say Sonny Corinthos (Maurice Benard) will battle some guilt. He’ll fear he didn’t handle Dante Falconeri’s (Dominic Zamprogna) return to Port Charles correctly and somehow set him up for trouble.

Robert Scorpio (Tristan Rogers) will assure Sonny that none of this is his fault. Dante was programmed into a dangerous man, but that’s not on Sonny. Lulu Falconeri (Emme Rylan) will gather with Sonny, Robert and Olivia Falconeri (Lisa LoCicero) on Monday. General Hospital spoilers say Lulu will accept that Dante isn’t coming home, so she’ll want them all to accept that, too.

Lulu will explain that she’s not fighting Dante on the end of her marriage. Their divorce will be finalized soon, which should bring some tough moments. We’ll keep you posted as other GH news comes in. Stay tuned to the ABC soap and don’t forget to check CDL often for the latest General Hospital spoilers, updates and news.