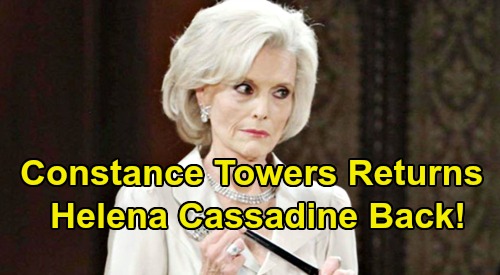 General Hospital (GH) spoilers tease that a shocking return is on the way. According to TV Line, Constance Towers will reprise the role of Helena Cassadine on Monday, August 19. Unfortunately, Helena won’t be back from the dead to shake things up in Port Charles. Instead, we’ll see a revealing flashback that features Helena – and it should offer another crucial piece of Drew Cain’s (Billy Miller) past.

All roads lead to Shiloh Archer (Coby Ryan McLaughlin) these days, so he’ll be part of this exciting GH return. In the flashback, Shiloh will interact with Helena and perhaps explain some important details from 2012. It looks like Shiloh may have delivered Drew to Helena, so it’ll be interesting to hear their conversation and learn a bit more.

Of course, it’ll be fun to see a little glimpse of Helena again, too. The confident villainess died in November 2016, but she popped up for some Nurses Ball mayhem in 2017. General Hospital viewers will recall Jake Webber’s (Hudson West) magic show and his fight against Helena’s evil mind games. She sat nearby as Jake hallucinated Helena and tried to resist her control.

As for what’s next in Port Charles, General Hospital spoilers say Shiloh’s Helena flashback could provide some great clues. Billy Miller already filmed his final scenes in July, so GH will want to answer some Drew questions and set up Miller’s onscreen exit. Shiloh’s days may also be numbered since he keeps facing one disaster after another. There isn’t much hope for Shiloh’s future, but he’ll try some last-ditch efforts anyway.

This flashback may tie in with Shiloh’s desperation, which is sure to get worse if he faces more failures. Jason Morgan (Steve Burton) pointed out that Shiloh’s starting to lose it. Shiloh’s doing whatever he can to stay afloat and wiggle out of trouble, but more chaos is just around the corner. General Hospital fans are hoping Shiloh finally pays the price sooner or later, so stay tuned for the bombshells ahead.

Are you looking forward to Constance Towers’ comeback as Helena Cassadine? Are you curious about Helena and Shiloh’s connection? We’ll give you updates as other GH news comes in. Stick with the ABC soap and don’t forget to check CDL often for the latest General Hospital spoilers, updates and news.