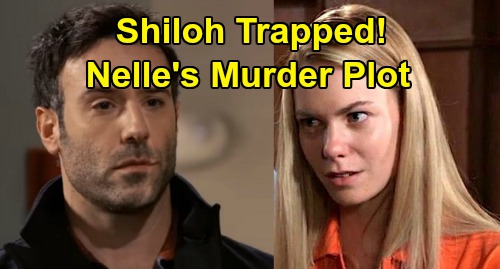 General Hospital (GH) spoilers reveal that Shiloh Archer (Coby Ryan McLaughlin) will work on another desperate plan. He’s all about those at this point! Shiloh was hoping to secure the location of his Afghanistan money by kidnapping Sam McCall (Kelly Monaco) and memory-mapping Jason Morgan (Steve Burton). That plot clearly went off the rails.

Shiloh was all set to use Cameron Webber (William Lipton) until Franco Baldwin (Roger Howarth) stepped in. Now Franco has Drew Cain’s (Billy Miller) memories, but Shiloh’s still seemingly out of luck. Franco has no reason to help Shiloh out at all – not that Shiloh needs all that cash at Pentonville anyway.

Speaking of Pentonville, we have to wonder what’s next for this loathed villain. GH surely won’t just lock him up and throw away the key. Shiloh seems poised to become a murder victim instead, but who will do the killing? There’s one scenario that would actually affect multiple storylines. Let’s consider how this could potentially play out.

General Hospital spoilers have been pointing to a Nelle Benson (Chloe Lanier) escape plot for a while now. In addition to reliable info, the show itself hinted at it when Ryan Chamberlain (Jon Lindstrom) suggested they could help each other. He connected with Nelle over their mutual hatred for Carly Corinthos (Laura Wright) and their missing kidneys.

Ryan also told Hamilton Finn (Michael Easton) that prison walls couldn’t hold him. Now that Shiloh’s going to be in the mix at Pentonville, things could get interesting. You might be thinking Ryan the serial killer plus smug Shiloh equals easy murder, but what if GH takes another route here?

After all, Nelle would have a strong motive to want Shiloh out of the way. She doesn’t want her baby swap scheme exposed, but she doesn’t want Shiloh getting his hands on Jonah Corinthos either. There’s also a chance Shiloh will find out the truth somehow and plan to divulge it to Willow Tait (Katelyn MacMullen) just to make her suffer.

Nelle certainly doesn’t want this shocker getting back to Michael Corinthos (Chad Duell), so what’s she going to do? General Hospital might as well let the three musketeers escape and take advantage of the drama. Shiloh will have a proposition for someone next week, so that could involve Ryan. If Ryan brings Nelle in on an escape strategy with them, maybe Nelle could plan to kill Shiloh on the outside.

Nelle plotted to kill her fiancé, Zack Grant, and later tried to arrange a hit on Michael. She doesn’t have much regard for human life in general, but that’s especially true for someone she views as a risk to her own happiness and her child’s well-being. Nelle could easily get her hands on a weapon and make this happen. Where there’s a will, there’s a way.

As a bonus, Nelle could get caught and leave everyone wondering why she was so intent on Shiloh dying. It’d spark questions that could lead to the truth about “Wiley Cooper-Jones.” Would you like to see Nelle take Shiloh out once and for all? We’ll give you updates as other GH news comes in. Stay tuned to the ABC soap and don’t forget to check CDL often for the latest General Hospital spoilers, updates and news.