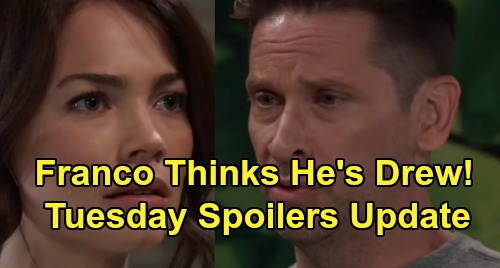 General Hospital (GH) spoilers update for Tuesday, August 13, tease that Elizabeth Baldwin (Rebecca Herbst) will be feeling devastated. As GH viewers know, Franco Baldwin (Roger Howarth) has just awakened, and his mannerisms and behavior are clearly Drew Cain’s (Billy Miller). He’s just asked to speak to his superior officer, so it certainly sounds like he’s a 2012 form of Drew who probably thinks he’s still in Afghanistan.

Of course, Liz was hoping for the best-case scenario, which would be for Dr. Arthur Cabot’s (Time Winters) memory transfer process to have failed completely. But she’d probably have taken a Drew-Franco hybrid scenario, too, if it had meant that some of her beloved Franco’s memories and quirky personality were still present.

Unfortunately, it doesn’t look like either of these scenarios is playing out, and in Tuesday’s episode, Franco will tell a horrified Liz that he’s never seen her before in his life. Franco not remembering her or anyone else who loves him will be tough enough, but in the immediate future, there will be another tough task to deal with – trying to convince Franco that he’s not Drew.

That could be a formidable task, and it’s likely going to result in a lot of confusion, and likely a lot of frustration, for Franco. He’s going to be operating in an entirely different world than everyone around him, and he’ll hear a story about his true identity that will sound like science fiction to him.

Hopefully, Kevin Collins (Jon Lindstrom) will remain on hand to help Elizabeth and everyone else try to deal with the delicate situation and contain Franco for the time being. After all, it would be too disturbing for him to start running around Port Charles right now. What if he were to run into, for example, Jason Morgan (Steve Burton)? A 2012-era Drew wouldn’t know that he had a twin, so Franco would get a huge shock seeing “himself” in Jason!

It will be a confusing time for everyone, it seems, but it will be interesting to see how Franco – as Drew – respond to everyone around him and the shocking information that he’s not who he thinks he is.

Meanwhile, on the new episode of General Hospital on Tuesday, August 13, Laura Collins (Genie Francis) will have a strange situation of her own. She’ll have a session with Ava Jerome’s (Maura West) new psychic, Chelsea Lambas (Jen Ray). As GH viewers know, Scott Baldwin (Kin Shriner) begged Laura to check in with Chelsea as a favor to him because he was worried about Ava getting scammed.

Well, it looks like Laura’s going to play along to see what Chelsea’s schtick is all about. GH previews show Chelsea asking Laura who she’s trying to “reach,” and Laura is most likely going to reply that she’d like to reach her son Nikolas Cassadine (last played by Nick Stabile). Of course, viewers know that GH has been dropping hints left and right that Nikolas may not be dead and gone, and it looks like Chelsea will drop another!

She’ll tell a stunned Laura that her son is in great danger. Laura will be pretty spooked by the whole thing, but what will she do next? Will she continue using Chelsea’s psychic services, or will she dismiss the psychic’s claims and move on?

It sounds like a lot of GH drama is heating up for Tuesday’s episode, so stay tuned! We’ll give you updates as GH news comes in. Stick with the ABC soap and don’t forget to check CDL often for the latest General Hospital spoilers, updates, and news.