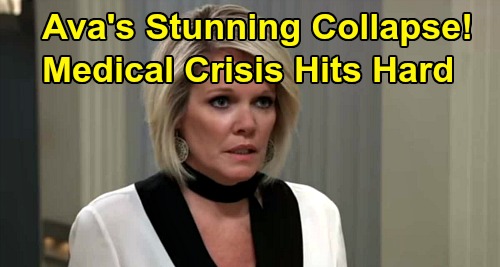 General Hospital (GH) spoilers tease that Ava Jerome (Maura West) is headed for trouble. She’s struggling to shake Ryan Chamberlain’s (Jon Lindstrom) hold on her, which is made even more complicated by Kiki Jerome’s (Hayley Erin) lack of forgiveness. Ava’s sinking deeper and deeper into despair, and it may take a toll on her health.

During the week of October 14-18, Ava will suddenly keel over. Her shocking collapse will leave Laura Webber (Genie Francis) concerned, so expect Laura to pay Ava a visit – perhaps at GH. Ava may be on the verge of a nervous breakdown if this keeps up. She’s been dealing with way too much mental anguish, and it’s just not good for her.

Nobody’s going to argue that Ava’s a saint, but she’s no worse than most of the people around town, at least these days. Ava simply doesn’t masquerade as someone she’s not. Even so, Ava’s dealing with some self-loathing right now. If Kiki would just forgive her, Ava could probably move on with her life and find some peace. Since that hasn’t happened yet, Ava will continue to have a hard time.

Of course, Ryan may make things worse with a little help from Nelle Benson (Chloe Lanier). After his meeting with Ava, Ryan ran into Nelle in the hallway. He got updates on Nelle’s parole hearing and suggested he hoped she’d keep him in mind on the outside. Ryan noted that he may need to ask a favor.

Nelle was quick to agree since they’re “kindred spirits.” Whatever this favor is will undoubtedly involve Ava. Ryan may have a special delivery in mind or some horrific gesture that’ll send Ava the message he wants. Then again, Ryan might lose hope and use Nelle to target his ex. It’s tough to say what’s swirling in that twisted mind of his, but you can bet it won’t end well for Ava!

Is all this building to Ryan’s great escape? He’ll be the only villain left at Pentonville, so GH needs to give this story some closure. Perhaps one last showdown with Ava could bring Ryan’s grim fate. Ava might decide Ryan’s right about the evil inside her and wipe him off the map.

If General Hospital wanted to throw in a twist, they could have Nelle save Ava and do the deed herself. They were friends once upon a time, so it wouldn’t be unreasonable for Nelle to stumble across the confrontation and kill Ryan to protect Ava. Since Nelle never does anything out of the kindness in her heart, she could demand Ava’s help in return. Nelle might need assistance with a scheme to kidnap “Wiley Cooper-Jones” or even Donna Corinthos.