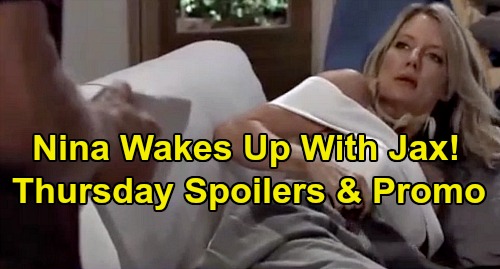 General Hospital (GH) spoilers for Thursday, October 10, tease that Hamilton Finn (Michael Easton) will confide in his brother. Harrison Chase (Josh Swickard) has worked hard to build a relationship with Finn, so he’ll be happy to lend a sympathetic ear. Finn will admit that he feels like Hayden Barnes (Rebecca Budig) is lying to him. He’ll find her behavior suspicious, but he won’t know for sure what she’s deceiving him about.

Chase is a big fan of honesty and tackling problems as they arise, so he might push Finn to confront Hayden. However, that’s not really Finn’s style. He’s a guy who likes to have all the facts first, so he may not want to throw accusations around before he’s certain.

Over with Laura Webber (Genie Francis), she’ll have some updates to pass along. Laura will fill Hayden and Curtis Ashford (Donnell Turner) in on what she’s learned so far. Thursday’s GH preview video shows Laura saying, “The location for the codicil is…”

Of course, Laura may not know more than she found out with Kevin Collins (Jon Lindstrom). Thanks to their constellation clues, they believe the codicil is indeed on Spoon Island. That narrows it down a bit, but this could still be like finding a needle in a haystack. The property is large and Hayden’s growing impatient, so she may express frustration on Thursday.

Other General Hospital spoilers say Nina Reeves (Cynthia Watros) will awaken to coffee and a warm smile. Jasper “Jax” Jacks (Ingo Rademacher) will greet Nina as she jolts up on the sofa at his new place. Nina fell asleep in her wedding dress after the derailed ceremony, but Jax will offer reassurance. He’ll be glad Nina had somewhere to rest after all the drama she just endured.

While Nina expresses her gratitude for Jax’s kindness, Valentin will seethe over what he’s lost. He already lashed out at Lulu Spencer (Emme Rylan) and promised she would pay. Valentin may turn his attention back to Sasha Gilmore (Sofia Mattsson) eventually. Sasha could’ve lied when Lulu presented her claims, so Valentin will think there’s plenty of blame to go around.

Naturally, Michael Corinthos (Chad Duell) will stand by Sasha. He’ll let her know she’s got his full support as she prepares to face the music. If legal drama comes out of this, Sasha will be ready to accept the consequences of her actions. Michael will likely assure Sasha that she’ll remain free and perhaps hope for reconciliation with Nina. He may argue that Nina just needs some time.

As for Liesl Obrecht (Kathleen Gati), she’ll have a conversation with Valentin Cassadine (James Patrick Stuart) about the problem child – well, problematic fake child! Liesl will contend that they have to send Sasha packing for good. Valentin may not be opposed to the idea since Sasha will serve as a constant reminder of his deception. Besides, the last thing Valentin wants is to see Sasha living happily ever after with Michael.

Next, Lulu will take Charlotte Cassadine (Scarlett Fernandez) out to brunch. She’ll hope to smooth things over with her daughter after the disastrous nuptials. After all, Charlotte knows Lulu was the one who objected and brought the fun to a screeching halt. The trouble is Charlotte doesn’t know the circumstances, and Lulu may struggle with how to explain this to a kid.

Charlotte will explode at Lulu in Thursday’s episode. General Hospital spoilers say Charlotte will demand an answer about why Lulu ruined the wedding. She adores her papa and almost stepmom, so she’ll definitely have questions about why Lulu prevented Valentin and Nina’s official reunion.

While Lulu tries to unpack all that, Peter August (Wes Ramsey) will tell Maxie Jones (Kirsten Storms) they were right about Sasha all along. Of course, it’s ridiculous for Peter to be judging Sasha for her lies when he’s got so many of his own. He’s keeping far worse secrets, so he certainly has no room to talk.

Peter may worry about the walls closing in thanks to the guy who helped Shiloh Archer (Coby Ryan McLaughlin) escape. He was taken into police custody, so he could rat Peter out – and that’s surely what Jason Morgan (Steve Burton), Sam McCall (Kelly Monaco) and Damian Spinelli (Bradford Anderson) are hoping.

Since that’d be far too easy, Peter’s accomplice may keep his mouth shut and count on a reward later. After all, Peter’s pretty good at putting together escape plots! We’ll keep you posted as other GH news comes in. Stay tuned to the ABC soap and don’t forget to check CDL often for the latest General Hospital spoilers, updates and news.