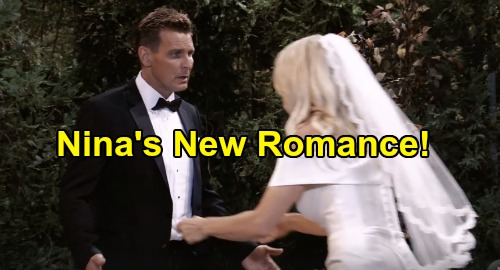 It was crushing for Nina to realize Sasha Gilmore (Sofia Mattsson) wasn’t her daughter after all. It was even more crushing to realize Sasha took part in the scheme. Of course, Valentin Cassadine’s (James Patrick Stuart) orchestration of this scheme was terrible, too. Nina thought she was finally getting her happily ever after, so it was awful to have it all yanked away.

Thankfully, Jax was Nina’s knight in shining armor. The big reveal itself was a bit lackluster, but it was so soapy to have Jax show up right when Nina needed him. A spark appeared as Jax took Nina’s hand and led her back to his new place.

Maybe it was the sunset glow or just Nina’s emotional vulnerability, but it felt like a huge shift for these two. There’s never been a ton of chemistry going on between Jax and Watros’ Nina, but it seemed to magically materialize – at least for some viewers. Others still don’t see it, but we all have different opinions on what works and what doesn’t.

Regardless, it’s obvious Nina and Jax are headed down a romantic road. The writing was already on the wall before this blowup with Valentin, but now this pairing’s moving full-speed ahead. General Hospital spoilers say Jax will grow even more fond of Nina. He’ll undoubtedly want to protect her as Valentin works to win Nina back.

Naturally, Nina won’t want to hear Valentin’s excuses and apologies. She may find herself much more drawn to Jax as a fresh start and a new kind of man. Jax has proven to be a liar as well, but not about something as important as Nina’s daughter. He wouldn’t have used Sasha to manipulate Nina, so that works in his favor.

Jax is a breath of fresh air compared to Valentin, who’s burned Nina time and time again. Naturally, Valentin isn’t going to be happy about this! He’ll do everything in his power to stop Jax and Nina’s relationship, but his efforts may be futile. Nina’s new romance is already starting to take shape.