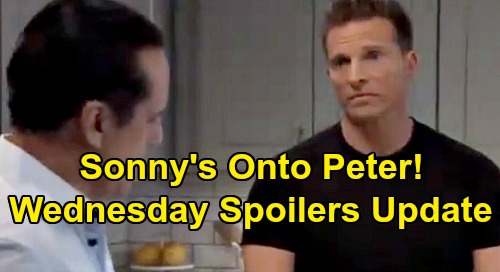 General Hospital (GH) spoilers update for Wednesday, October 9, teases that Maxie Jones (Kirsten Storms) just won’t understand all the lies from Sasha Gilmore (Sasha Gilmore). She didn’t expect any better out of Valentin Cassadine (James Patrick Stuart), but Sasha was clearly distraught over her deception. Maxie just won’t get what’s so hard about telling the truth. She’ll feel like Sasha should’ve come clean a long time ago and prevented the nightmare wedding.

Of course, Peter will start thinking about his own situation and how he’s in too deep to turn back. He can’t confess without losing Maxie – most likely forever. As a result, Peter will keep his mouth shut and hope Maxie never finds out the extent of his horrible transgressions.

Meanwhile, Sonny Corinthos (Maurice Benard) will have a chat with Sam McCall (Kelly Monaco) and Jason Morgan (Steve Burton). They’ll bring Sonny up to speed on Peter’s connection to Shiloh Archer (Coby Ryan McLaughlin), so he’ll undoubtedly hear about the suspicious cash withdrawal. Dev Cerci (Ashton Arbab) helped “JaSam” out with his updates on Peter, so Sonny should appreciate that, too.

Other General Hospital spoilers say Damian Spinelli (Bradford Anderson) will uncover a bombshell. He’ll be ecstatic over his eureka moment, which could help clear Sam’s name. Spinelli will look into this altered recording and hope he can find something that proves it’s bogus. From the sound of things, it seems Spinelli will get his wish.

Over with Franco Baldwin (Roger Howarth), he’ll offer an apology to someone and spark an interesting conversation. There’s no word on who that someone will be, but there are several options. Elizabeth Baldwin (Rebecca Herbst), Cameron Webber (William Lipton) and Julian Jerome (William deVry) are some possibilities to consider. Franco might even be sorry about the tricky position he’s put Kim Nero (Tamara Braun) in.

However, Kim’s happy to do anything she can for Franco. She views him as Drew Cain (Billy Miller), so she’s fighting to keep it that way. Martin Gray (Michael E. Knight) will sit down with Kim to strategize in Wednesday’s GH episode. He’ll let Kim know he intends to put “Drew” in the center ring. Martin will feel like it’s important for “Drew” to speak up in court and show he’s mentally aware of what’s going on. It’s Franco’s best hope of avoiding the memory reversal procedure.

As for Cameron, he’ll want to get on the stand as well. Cameron may think he needs to be the one to explain the situation with Franco, Shiloh and Dr. Arthur Cabot (Time Winters). General Hospital spoilers say this storyline will bring some shockers and shakeups, so don’t miss what’s in store.

Finally, Robert Scorpio (Tristan Rogers) will bring terrible news to Jordan Ashford (Briana Nicole Henry). It’ll be bad enough that he wants to deliver it in person, so this should definitely be a tough blow! We’ll keep you posted as other GH details emerge. Stick with the ABC soap and don’t forget to check CDL often for the latest General Hospital spoilers, updates and news.