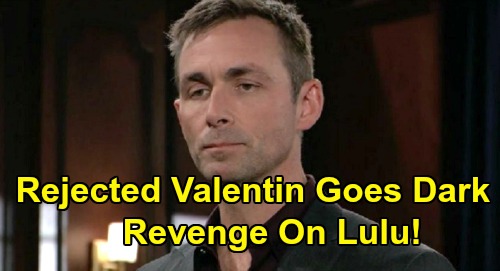 General Hospital (GH) spoilers tease that Valentin Cassadine (James Patrick Stuart) will struggle to accept the loss of his relationship. He’ll believe if he can just convince Nina Reeves (Cynthia Watros) to listen and understand, he can win her back. However, Valentin has told one lie too many.

Nina feels stupid for trusting Valentin again, so there’s no way she’s forgiving him anytime soon. Never say never on a soap, but Valentin will have to face the facts for now. Of course, accepting this outcome will only leave Valentin more enraged.

Valentin’s upset over his own heartbreak, but he knows Nina faced the worst blow. That’s why Valentin ripped into Lulu Falconeri (Emme Rylan) and made a chilling promise. In the aftermath of Sasha Gilmore’s (Sofia Mattsson) exposure and the wedding blowup, Valentin vowed to make Lulu pay for destroying Nina. He already hated Lulu, but her latest move means war!

GH fans know Valentin can be a vengeful, violent man when he wants to be. He’s a sweetheart when it comes to Charlotte Cassadine (Scarlett Fernandez), but he’d got a dark side that’s always bubbling underneath. Charlotte’s love for Lulu may be the only thing that spares Lulu’s life in the coming months.

How will Valentin seek the vengeance he’s promised? There are a couple of ways he could go about it. The first plan might be playing the blame game and turning Charlotte against her mom. Charlotte’s a smart kid, but she loves her papa. It would probably be pretty easy to make Charlotte see this from Valentin’s point of view.

Valentin could encourage Charlotte to see that he wanted to make Nina happy, and that’s actually true. There’s no doubt that Valentin came up with this whole scheme to win Nina back, but he would’ve done it even without that result. Valentin was glad to give Nina the daughter she so desperately longed for – regardless of whether she took him back or not.

Naturally, Lulu would try to make Charlotte see things her way as well. She might be able to offset any damage Valentin does by reminding Charlotte that it’s important to be honest. Lulu could suggest that the truth has a way of coming out, so Valentin set Nina up for heartbreak by lying about Sasha.

In other words, Valentin may not be able to poison Charlotte against Lulu for long. General Hospital may not take the custody route either since they’ve been down that road before. Instead, Valentin’s best bet is to ride this out and let Lulu’s romance with Dustin Phillips (Mark Lawson) bloom. Just when Lulu truly falls in love and feels like she’s getting a happily ever after, Valentin can strike.

Valentin may not be willing to kill Lulu, but Dustin is a different story. He could end up with a target on his back thanks to Lulu’s outburst at the church. Valentin will want to make sure Lulu is just as heartbroken as he is. If he fails to sabotage “Lustin” through more reasonable methods, Valentin could take drastic and deadly action.

General Hospital spoilers say Lulu and Dustin’s romance could come with some major curveballs thanks to Valentin. On the bright side, Valentin’s efforts may backfire and bring them even closer. Some danger could be just what Dustin and Lulu need to deepen their bond! We’ll give you updates as other GH news comes in. Stay tuned to the ABC soap and don’t forget to check CDL often for the latest General Hospital spoilers, updates and news.