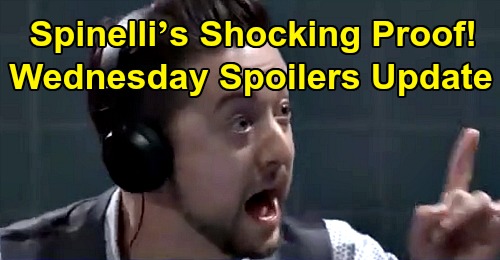 General Hospital (GH) spoilers for Wednesday, October 9, tease that Robert Scorpio (Tristan Rogers) will have some troubling updates. He’ll tell Jordan Ashford (Briana Nicole Henry) he’s got some news he wanted to deliver in person. Robert will seem a bit blue about this info, but Jordan won’t have time to dwell on it. She’s got people to see and cases to solve.

Of course, Damian Spinelli (Bradford Anderson) may do a better job of cracking Sam McCall’s (Kelly Monaco) case. He’ll have an “aha” moment in Wednesday’s episode, and it looks like it’ll be related to the doctored recording. Spinelli might believe he has proof it was altered, but convincing Jordan and her team could be tough.

Jason and Sam will explain their accomplice suspicions, which are backed up by that $35,000 withdrawal on the night Sam was kidnapped. Sonny will undoubtedly agree Peter is up to no good, but they need Spinelli to come through for them here. They can’t come forward with any of their findings until they have something solid to expose Peter.

Over with Maxie Jones (Kirsten Storms), she’ll be upset over this whole situation with Sasha Gilmore (Sofia Mattsson). Maxie will vent to Peter and ask, “How hard is it to just tell the truth?” You can bet that’ll make Peter uncomfortable; he’s been telling Maxie everything but the truth lately!

Other GH spoilers say Cameron Webber (William Lipton) will want to help. He’ll be willing to take the stand and give his account of what happened to Franco Baldwin (Roger Howarth). However, Martin Gray (Michael E. Knight) will tell Kim Nero (Tamara Braun) he wants to put “Drew” in the center ring. It seems Martin will think only “Drew” can convince a judge that he’s of sound mind and should be free to make his own choices.

Franco will also believe he owes someone an apology on Wednesday. It’s possible Franco will work another angle with Liz or perhaps face concerns about what this is doing to Kim. Franco might even apologize to Cameron or Julian Jerome (William deVry) if Julian chooses to stop by.

Regardless, both Kim and Liz are desperate to have Franco in their lives. They just want very different versions of him. General Hospital spoilers say the fight for Franco will continue, so don’t miss all the action ahead. We’ll keep you posted as other GH details emerge. Stay tuned to the ABC soap and don’t forget to check CDL often for the latest General Hospital spoilers, updates and news.