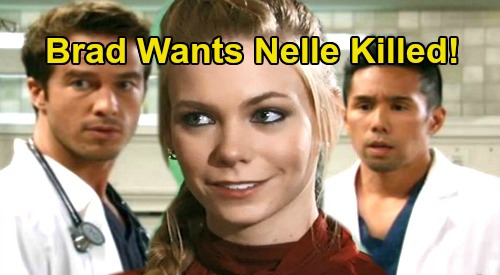 General Hospital (GH) spoilers tease that Brad Cooper (Parry Shen) will contact Julian Jerome (William deVry) and hope his ally comes through for him. GH fans know Julian was roped into quite a mess. When Brad first came clean about the baby swap, he left out a crucial part of the story. Once Julian found out “Wiley Cooper-Jones” is actually Jonah Corinthos, it totally changed the game.

Of course, there’s nothing Julian can do now. Coming clean would devastate Lucas Jones (Ryan Carnes), which is obviously something Julian doesn’t want to do. Julian also doesn’t want to end up on Sonny Corinthos’ (Maurice Benard) bad side. He realizes he’ll face Sonny’s full wrath if his knowledge of this comes to light. As Brad pointed out, Sonny won’t want to listen to Julian’s side of all this.

However, keeping quiet will become increasingly difficult thanks to Nelle Benson (Chloe Lanier). She’s up for parole soon, so Brad will worry about the real birth mother’s plans. Nelle has made it clear that she’d like to be in “Wiley’s” life. The trouble is Nelle can’t be trusted at all. Brad will hate the thought of Nelle snatching “Wiley” or tipping Michael Corinthos (Chad Duell) off with suspicious behavior.

General Hospital spoilers say Brad will get in touch with Julian about his problem, so what will he want? Will Brad once again push Julian to commit murder? Julian wasn’t willing to kill Liesl Obrecht (Kathleen Gati) and suggested Nelle was far more of a threat. Brad may remind Julian of his own concerns. He may insist that if Nelle scores her freedom, Julian has to make sure she turns up dead.

Brad considered Nelle a friend once upon a time, but this is his family we’re talking about. He’d do pretty much anything to keep the Jonah truth under wraps. If Julian refuses to kill Nelle, Brad might even be willing to do the deed himself. There’s no line Brad won’t cross if it means keeping Lucas, Michael and the rest of Port Charles in the dark.

General Hospital spoilers say Nelle’s freedom could put her in danger. Will Brad order a hit on Nelle and force Julian to make another tough call? Could Nelle’s life be in jeopardy? We’ll give you updates as other GH news comes in. Stay tuned to the ABC soap and don’t forget to check CDL often for the latest General Hospital spoilers, updates and news.